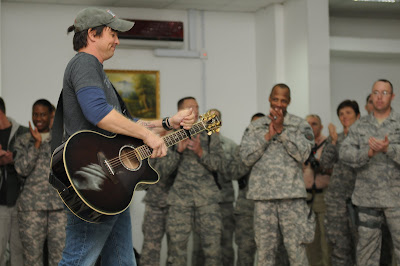 Since making it home from the 1993 "Black Hawk Down" battle in Somalia, Keni Thomas has become a successful country music singer, motivational speaker and author.

"I came out of the military with a pretty good skill set, and there were jobs I could have taken," Thomas told the Unknown Soldiers. "But music is a disease. It's incurable."

Of all his endeavors, there is nothing more important to this ex-Army Ranger than visiting with wounded heroes of the Afghanistan and Iraq conflicts. He thinks every day about his conversations with combat veterans at various hospitals, including a female military truck driver who lost her leg when her vehicle hit an improvised explosive device.

"I told her it was okay to be upset about what happened to her, and she started crying," Thomas said. "She said, 'I just don't know if anybody will ever love me.' It was so basic and human."

Thomas will never forget the chaotic battle he and his fellow troops fought on the war-torn streets of Mogadishu more than 18 years ago. One reason he's so touched by his encounters with wounded veterans is because he knows he could have easily ended up in a hospital bed, wheelchair or cemetery.

"There's not a day that goes by that I don't think about it in some sort of way," Thomas said. "I don't mean it in a 'Rambo' flashback sort of way; I know by the grace of God is the only reason I'm still around."

Thomas has a special talent for bringing the 99 percent of Americans who have never experienced combat into the minds of the one percent who have.

"It took me a long time to figure it out, Tom, but when you make it home from something like that, there's this weird sense of guilt," he explained. "Why did I survive when other people deserved to live?"

The Army Ranger lost several friends in the brutal urban battle. Even though Thomas threw himself into his music career soon after coming home, feeling content during the past two decades has been difficult. Instead of enjoying his success, he has often agonized over his fallen buddies who didn't get the same opportunity.

"They had families. They had kids. They were twice the soldier I was," Thomas said. "Whenever something good happens in your life, it's like you don't let it happen, because that little voice reminds you of your friends who didn't make it.

"It sabotages everything that's good in your life," he concluded.

"It's what I do," the singer-songwriter said. "I love to tell stories."

Another challenge recently conquered by the guitar hero was writing a book. In "Get It On: What It Means to Lead the Way," Thomas recounts the chaos of "Black Hawk Down" while using the battle's painful lessons to convey principles of leadership.

Thomas candidly admits that at the Mogadishu battle's outset, when U.S. troops set out to confront a murderous warlord, the highly trained Ranger did not expect the bloodiest American firefight since Vietnam.

"When you set a goal, it always takes longer than you think it's going to take," he said. "It's a good lesson for us."

Whether it's in a book, song, or conversation with a wounded veteran, Thomas tries to convey the same powerful message. Without faith, Thomas believes, he wouldn't be in a position to help others.

"That's one of the beauties of putting some mileage on your life," he said. "You can see with clarity that there's no way you ended up where you ended up on your own accord."

"Hopefully, she'll find that if she doesn't let the guilt, the wounds and the anger consume her, she'll get back into life and she'll do just fine," he said. "I hope someone will love her, and I hope everybody finds a sense of purpose."

"When I can't sing anymore, I think my life is going to be dedicated to teaching Iraq and Afghanistan veterans that it's OK to be happy," he said.