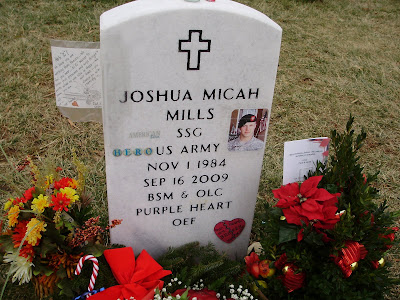 When Staff Sgt. Joshua Mills joined the Army in 2005, his family prepared for many holidays apart, including Christmas. Yet as his older brother told The El Paso Times, the Green Beret would almost always manage to find his family on December 25.

I learned of Staff Sgt. Mills' story on Christmas 2010, while walking through Section 60 of Arlington National Cemetery. While every resting spot on this sacred ground is important, Mills' headstone stood out because of moving, carefully placed decorations on and around the Soldier's headstone.

As you can see in the above photo, a loved one or friend pasted his picture and a "hero" sticker on each side of "U.S. Army," while the small tree and candy cane on each side of the headstone signify the true meaning of Christmas: Sacrifice, love, and family.

When Mills was deciding on his career path, Chris Roberts reports that he decided to follow the noble path of his dad, Tommy Mills, who had a distinguished career as an Army warrant officer. One of his brothers, Travis Mills, serves in the Air Force. Joshua Mills' inner call to serve was so strong that he left the University of Texas to enlist, trading dorm rooms and fraternity parties for 5 a.m. wake up calls and demanding tests of physical skill and emotional willpower. Training was hard on the aspiring Soldier, but it all paid off when he became part of the Army's elite Special Forces.

On September 16, 2009, the 24-year-old Green Beret was on his second deployment to Afghanistan when an improvised explosive device planted by terrorists took his life in Helmand province. Killed alongside Mills were Sgt. 1st Class Bradley Bohle, 29, and Sgt. Shawn McCloskey, 33. All three departed warriors served with the 3rd Battalion, 7th Special Forces Group, based out of Fort Bragg, North Carolina.

December 25, 2010, marked the second Christmas since Mills was taken from his family. Not long beforehand was the second birthday of his young son, Malaki, who is learning about his father's heroism from his mother, grandparents, aunts, and uncles. A deeply moving Batman-themed birthday party invitation attached to the fallen Soldier's headstone shows us that dad will always be an integral part of his son's life.

"We feel you near...'Ki Ki' seems to sense your presence and says things and points when no one else is there. We know you are are NOT GONE -- you will always be with us -- especially in our hearts."

Cars were permitted to pass through most roads inside Arlington National Cemetery on Christmas, perhaps because officials knew how many relatives and friends wanted to visit their fallen heroes on the special holiday. Just as I was leaving, a large pickup truck pulled up with a huge tribute to Staff Sgt. Joshua Micah Mills on the back window. Once again, this proud, patriotic American family was together for Christmas. 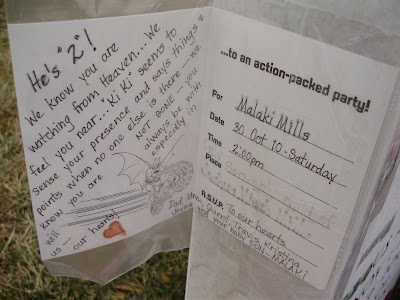 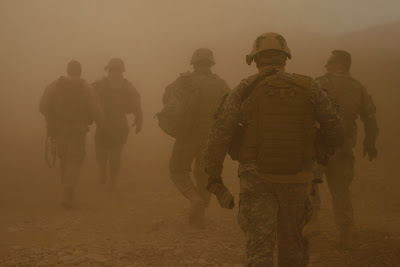 While the above photo is clouded by blowing sand, one fact is crystal clear. Conditions are far from ideal for Marines in Badghis province, Afghanistan, which is in the northwest part of the country not far from the border with Turkmenistan. While temperatures and terrain vary around Afghanistan, which is roughly the size of Texas, troops serving in the country must adjust to a primitive environment that would shock some Americans who take things like running water, toilets, and heat for granted.

Soon, more Marines will join their thousands of brothers and sisters in arms in Afghanistan. The Wall Street Journal reports that 1,400 additional Marine warriors will deploy to the post-9/11 war zone as early as mid-January. For each Marine that takes this dangerous journey, there are dozens of loved ones, friends, and fellow troops worried about their safety. The impact of these types of deployments on the military community cannot be overstated.

I have watched several hours of cable news coverage in the past two days and heard next to nothing about events on the ground in Afghanistan or Iraq. From the death and capture, respectively, of two senior terrorist leaders, to the life-saving measures Polish troops used to rescue a pregnant Afghan woman and help deliver her baby, there is plenty of fascinating news to report. Instead, cable news is obsessing over the new Congress, which is an important political development, but something everyone knew would happen for months.

For the thousands of coalition troops serving in Afghanistan and Iraq, life is intensely unpredictable and immeasurably different than home. While the national media isn't particularly interested in their personal sacrifices, I strongly believe that the majority of the American public deeply appreciates what these brave men and women do every day. As we go about our lives at home, our fellow Americans are attacking the enemy where it murders, plots, and plans. To our brave service members: Thank you for standing guard in faraway places. 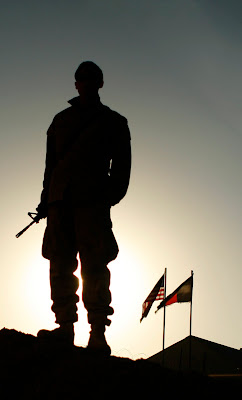