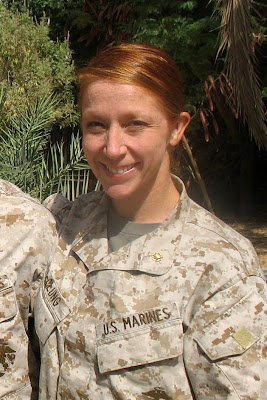 During a phone conversation with the parents of Maj. Megan McClung, I referred to the loss of their daughter in Iraq as a tragedy. The fallen Marine's mother, Dr. Re McClung, offered a prompt, polite correction.

"Nothing about Megan's life was tragic," Maj. McClung's mom, speaking from Coupeville, Wash., told the Unknown Soldiers. "A tragedy does not occur when you have a compelling desire to serve your country in the best possible way."

Long before she fought for freedom, Megan declared her independence.

"When she was about 2 years old, I would try to lay her clothes out on the bed," Re said. "She would take the outfit and say, 'No, mommy, I want to wear this instead.'

"I knew she would go on to do something really important," Megan's mother concluded.

Whether it was learning to climb up the stairs, successfully arguing for admittance to an all-male strength training class, or becoming the first woman to attend the prestigious Admiral Farragut Academy in Toms River, N.J., an unjust "no" was something Megan refused to accept.

"In the military, you often hear about 'command presence,'" said Dr. Mike McClung, who served as an infantry platoon commander in Vietnam. "Megan had command presence as a young child."

As a Marine, Megan impressed her peers by sticking up for them.

"Megan was an interesting little force because she had no qualms about speaking up to a senior officer if she thought something was wrong," her father said.

"Megan used to collect quotes, and she'd write them on scraps of paper and stick them in a book," Re said. "One of them says, 'To give anything but your best is to waste the gift.'"

Megan gave her best as a marathon runner, gymnast and diver. She earned a master's degree in criminology from Boston University. And she was one of the most effective public affairs officers the Marine Corps had ever seen.

"She wanted to see first-hand what was going on (in Iraq)," Megan's mother explained. "She wanted people to write about the individual stories of bravery."

Determined that political divisions at home should not overshadow the heroism she witnessed on the ground in Iraq, Megan brought a profound sense of purpose to her job.

"Within a month of Megan being there, the whole attitude and feeling of the base had changed," her mom said. "Megan was focusing on the good things."

Spending almost all of 2006 in Iraq's then-volatile Al Anbar Province, McClung was tasked with helping journalists embed with units on the ground.

"She wanted to make sure the writer got the story he or she was looking for," her dad said.

In dealing with the press, Megan had a motto that rubbed off on fellow Marines: "Be bold. Be brief. Be gone." Today, those six words are engraved on her headstone at Arlington National Cemetery. 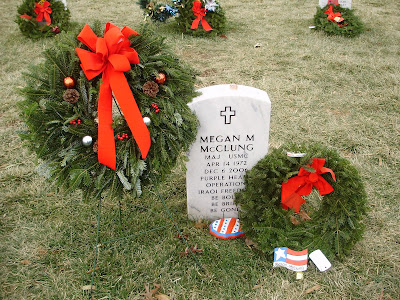 Megan didn't just repeat her mantra. She lived it.

On Dec. 6, 2006, Megan was helping escort Newsweek journalists through Ramadi when an improvised explosive device detonated beneath her vehicle. McClung, 34; Army Capt. Travis Patriquin, 32; and Spc. Vincent Pomante III, 22; were killed in the attack.

For five years, Mike and Re McClung have approached Megan's death with the same passion their daughter displayed in life. They support scholarships, marathons, and charities that embody Megan's focus on mind, body, and spirit. They learn more about Megan the warrior from her fellow Marines. And when they have a bad day, Megan's collection of quotes provides comfort.

"Do something you're passionate about," one quote reads.

That saying is rarely lived to the fullest. Yet Megan spent 34 years doing the things she was passionate about, which included helping some of the Iraq war's most compelling examples of valor end up on our kitchen tables.

After a revealing conversation with her parents, it's clear that the story of the highest-ranking female Marine officer to be killed in Iraq is not tragic. The real tragedy would be for us to forget Maj. Megan McClung's extraordinary life. 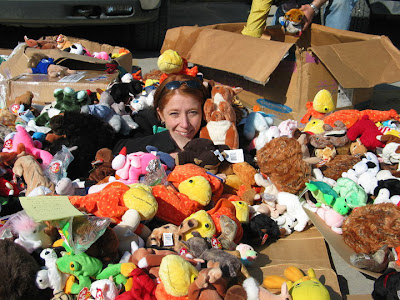