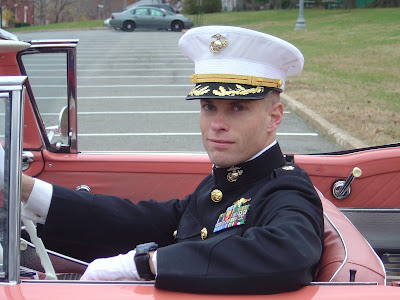 Lt. Col. Trane McCloud's first name is actually Joseph. Yet throughout his life, the loyal son, devoted husband, caring father and valiant Marine went by his middle name. He did so to honor his mother, who always thought "Trane" was the best fit.

As a child, Trane, who dreamt of someday serving on a battleship, was fascinated with building things. One of little Trane's proudest moments was finishing a complicated model of the USS Missouri.

"How many little boys build a model ship and then wind up serving on that ship?" his mother said.

On Dec. 7, 1991 — the 50th anniversary of the attack on Pearl Harbor — Trane helped guard President George H.W. Bush when he boarded the USS Missouri during commemoration events.

"When the (ceremonies) finished, the president turned to Trane," his father, Ron McCloud, explained. "He said, 'I know you'll make a great Marine officer.'"

The first President Bush — a war hero himself — was right. Trane would go on to serve in Bosnia, Somalia and Iraq. But first, after Desert Storm, he became a great husband.

"Meeting and marrying Trane was the best thing that ever happened to me," Maggie McCloud said.

It quickly became obvious that Maggie and Trane were meant to be together.

"They became quite the couple, I'll tell you that," Trane's dad said.

They also became quite the parents.

"He would work crazy hours when he was deployed and when he wasn't," Maggie said. "But no matter what time he got home, if the kids were up, he would run upstairs, and you would hear giggles and the sounds of joy."

"He let his actions speak for themselves," she said.

Before eating a meal, Trane would always bow his head in prayer. Before stating his opinion, he would always take the time to listen to other points of view.

Before deploying to Iraq in August 2006, he spent a special day with each of his three children in Hawaii. Maggie said Trane and the kids called it "Daddy day."

After Trane left the Hawaiian paradise for a combat deployment on the hellish streets of Fallujah, Maggie spoke to her husband only once.

"He had faith in me and the family that we would take care of the home front," she said. "He had a very important job — a tough job — and he wouldn't be on the phone calling home when the other guys couldn't do that too."

On Dec. 4, 2006, less than two weeks before his 40th birthday, Trane died in an Al Anbar Province helicopter crash. A fellow Marine and two U.S. Army soldiers were also killed.

For the McCloud children, even five years after the crash, every day is still Daddy day.

"Daddy made the last birthday cake for me," Meghan, who was just 2 years old when her father died, recently told her mom.

"Daddy bought me chewing gum on my Daddy day," Grace, who was 5, told her grandma.

Hayden, who was 7, whistles almost exactly like his dad and displays many similar traits. With each visit, Roma sees more of Trane in her grandchildren.

"It's a loss, but in their little hearts, he's there as big as life," Trane's mom said.

Trane's spirit lives on in his brother, Army Staff Sgt. Richmond McCloud, 41, who is currently deployed to Afghanistan.

"He figures that by now, his brother would have been in Afghanistan," Ron said. "He has a heartfelt desire to be of service to his country."

Maggie tries her hardest to live every day like the man she'll always love.

"I'm a better person for having him in my life," she said.

Staying true to the name his mom called a perfect fit, Lt. Col. Trane McCloud loved his country, believed in God, and took care of his wife and children. That's just how this Marine rolled.

"Trane was Trane," his mother said. "And he knew who he was." 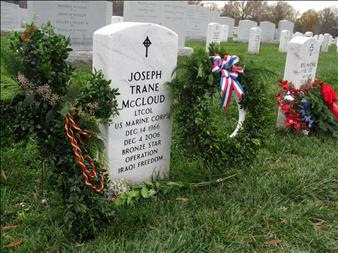