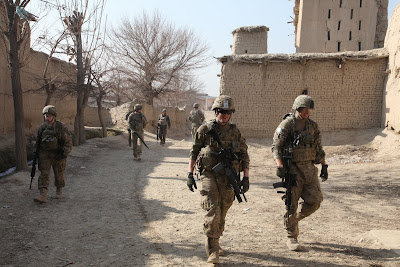 It's a big weekend in the United States. The NFL playoffs start on Saturday and there are two Republican presidential debates scheduled ahead of Tuesday's New Hampshire primary.

By the way, tens of thousands of Americans from our cities and towns are still fighting in Afghanistan. As someone who worked in newsrooms for eight years, I can virtually guarantee that you will hear more about the Saints-Lions game and Newt Gingrich and Mitt Romney's political advertising "war" than the heroism our troops will display on the battlefield this weekend.

Toward the end of 2011, I put a poll on the left side of this blog that asked "What grade do you give the national media on its coverage of the wars in Iraq and Afghanistan?" Out of 1,108 responses to this survey, a grand total of about two percent gave the press an A or B. Just under 98 percent of voters gave the media a C, D, or F, with 62 percent of all respondents assigning a failing grade to journalists.

Clearly, this blog's poll results are unscientific. The Pew Resarch Center's study on 2011 media coverage is not. The Pew report found that the war in Afghanistan accounted for just two percent of American news coverage in 2011, which is on par with reporting about the European economy.

Inexcusably, Afghanistan reporting made up even less of overall news coverage than 2010, when a paltry four percent was dedicated to the conflict.

In 2011, the sacrifices of heroic men like Marine Gunnery Sgt. EJ Pate , who was killed trying to disable an enemy bomb in Afghanistan while his equally heroic wife, Staff Sgt. Kim Pate, served in Kuwait, went virtually unnoticed. The Pates gave everything for our freedom, and they deserved better.

Given that the number of Americans killed in action in Afghanistan was only slightly lower than 2010, and that the deadliest month of the entire war tragically took place in August 2011, the coverage decisions made by news executives simply cannot be defended.

What will continue to be defended, however, is freedom of the press. Our men and women in uniform fight to preserve American values every single day in the desolate mountains and deserts of Afghanistan, regardless of what's on nightly newscasts back home. Some warriors, like Marine Cpl. Reece Lodder and Army Sgt. 1st Class Mark Burrell, manage to report while they're fighting. These are real heroes of journalism, and you'll never see them patting themselves on the back.

Polls are just polls, and on this website, the "two percent" that will continue to be spotlighted is the roughly one percent of Americans who fight and have fought in the Afghanistan and Iraq conflicts, as well as the other one percent that is often overlooked: their families. The Unknown Soldiers blog and weekly Creators Syndicate newspaper column, along with the incredible Travis Manion Foundation, which I am honored to work for, will continue to focus on this two percent, which shoulders an incalculable percentage of our nation's burdens at home and abroad.

The state of our economy and the upcoming presidential election are important. Both would be thrown into chaos if terrorists are once again able to attack America. Were it not for champions of freedom like Army 1st Lt. Nick Vogt, who still manages to smile in his hospital bed despite losing his legs in Afghanistan, the limbs of innocent American children would be stolen by terrorists planting bombs on our city streets.

It's a big weekend in the United States. Our nation is at war.