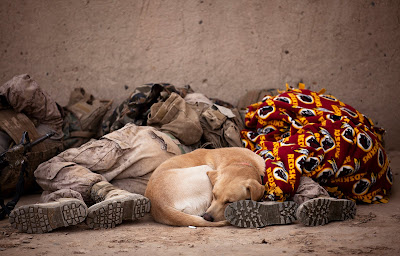 I'm not sure what Marines deployed to Afghanistan would consider their best friend -- a dog or a good night's sleep.

The above photograph was taken last week by Cpl. Reece Lodder, who The Unknown Soldiers profiled just before he left for Afghanistan. Needless to say, the Marine combat correspondent is doing fine work during a tough deployment.

According to Cpl. Lodder's caption, the dog in the photo, Blue, detects improvised explosive devices. Blue is protecting his handler, Marine Lance Cpl. Jarrett Hatley, 21, of Millingport, North Carolina, as he takes a quick nap (covered by a Washington Redskins blanket) after helping Afghan National Army soldiers clear compounds in the central Helmand River Valley, a volatile area rife with threats from insurgents and terrorists.

The other Marine resting in the photo is Lance Cpl. Matthew Scofield, 19, of Syracuse, New York. Both Marines are assigned to 3rd Platoon, Lima Company, 3rd Battalion, 3rd Marine Regiment.

I can't imagine how difficult it must be to get some sleep -- even for a few hours -- while deployed to a war zone. Having spoken with Lodder, I'm sure he hopes this photo reminds people what thousands of America's brave men and women in uniform serving in Afghanistan are sacrificing on a daily basis for our freedom and security.

To Cpl. Lodder, Lance Cpls. Hatley and Scofield, all your fellow Marines, and of course, Blue the dog: thank you for your service and stay safe!