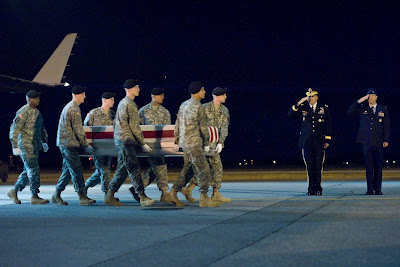 Almost every American sports fan has heard of Hickory, Ind., which was immortalized in the 1986 film "Hoosiers." Yet many who recite the movie's unforgettable lines think Hickory actually exists. It doesn't, although some real-life towns come close.

The northern Indiana town of Hamlet is about 100 miles from New Richmond, where most of "Hoosiers" was filmed. Like the fictional community that Hickory High unites on its way to an improbable men's basketball state championship, Hamlet is tiny, with just 300 households full of fathers and sons who love Indiana sports.

Spc. Robert Tauteris III just returned to the Hoosier State from Afghanistan, where he was serving with the 713th Engineer Company of the Indiana National Guard. Instead of a welcome home celebration, though, the 22-year-old soldier came back to the United States for a Jan. 8 dignified transfer ceremony.

The soldier escorted the flag-draped casket carrying his father, Spc. Robert Tauteris Jr., home from Afghanistan. On Jan. 6, alongside Staff Sgt. Jonathan Metzger, 32, Spc. Christopher Patterson, 20, and Spc. Brian Leonhardt, 21, the elder Tauteris, 44, was killed by an improvised explosive device planted in the volatile Kandahar Province, according to the Pentagon.

Surrounded by his family, the grieving son spoke to reporters on Jan. 11. Quotes from the news conference are provided by WSBT-TV reporter Clifton French, an Iraq war veteran.

"It was an honor being able to escort my father and the other fallen soldiers home from Afghanistan," Tauteris said. "It's something I'll never forget, and I'm more honored to do that than I have been to do many things in my life."

Long before the father and son served together in Afghanistan, the younger Robert and his brother, Matthew, looked up to their dad.

"He stood up as our boy scout leader from the time we were very young to being too old to be in boy scouts," the soldier said.

Gen. Martin Dempsey, Chairman of the Joints Chiefs of Staff, stood and saluted in the darkness of Delaware's Dover Air Force Base as fellow troops carried each flag-draped casket onto the soil of the nation they died for. Maj. Gen. Martin Umbarger, adjutant general of the Indiana National Guard, called on Americans to recognize the enormous sacrifices still being made in Afghanistan.

"We have no more solemn obligation than rendering the proper respect, honor, and tribute to these faithful warriors and to provide the fullest possible support to their families during this difficult time," Maj. Gen. Umbarger said.

Tauteris reminded reporters that while his dad was a dedicated soldier after enlisting at age 40, he was a father, first and foremost.

"I can't stress enough how much he cared about me and my brother," the soldier said. "It was the most important thing to him; it was like his meaning in life was to be a father."

America's post-9/11 conflicts have touched many fathers and sons. In May 2010, Chief Warrant Officer Michael McHugh boarded a plane in Iraq, where he was deployed, to meet the flag-draped casket of his father, Col. John McHugh, 46, who had been killed alongside four fellow troops in Afghanistan.

Just days after Col. McHugh's death, the Kansas City Royals honored the fallen hero by asking his grieving son to throw out the first pitch before a home game.

"I lost my best friend," Chief Warrant Officer McHugh wrote to the Unknown Soldiers in 2010. "The first pitch at Kauffman Stadium was such an honor, and we're grateful to the Royals for doing that for our family."

Like Michael McHugh, Robert Tauteris III is an American soldier — but also a son who lost his dad.

"He is a hero," Spc. Tauteris III said of his father. "I think what made him who he is ... is how much he cared about his children and his family."

One of the most touching moments in "Hoosiers" comes when Hickory's assistant coach, played by Dennis Hopper, is thrust into leading the team after the head coach, played by Gene Hackman, is ejected. After the play he drew up wins the game in dramatic fashion, he is approached by a player who is also his son. 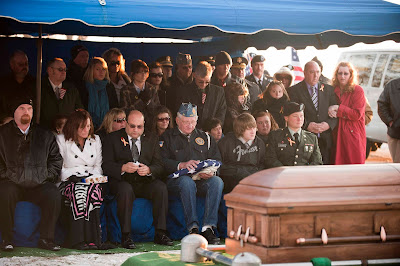