The Mayor of Bordentown 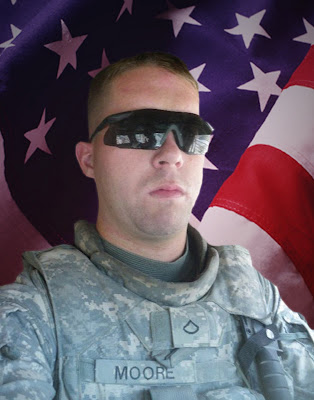 In cities and towns across America, millions of little children dream of becoming firefighters, soldiers or leaders. In Bordentown, N.J., one little boy became all three.

"We lived about a half a block from a firehouse," Amy Moore told The Unknown Soldiers. "Ben would always go to where the city workers were."

Her son, future Army Spc. Benjamin Moore, felt an instant connection to those who put out fires. The little boy wanted to learn more about his heroes and their families.

"He knew everything about everyone," she said.

On Sept. 11, 2001, as an anguished Mayor Rudy Giuliani said the number of casualties in New York would be "more than any of us can bear," Ben watched emergency workers risk everything to save the innocent. Just 65 miles from the epicenter of the worst terrorist attack in U.S. history, Ben, 14, resolved to become a firefighter.

On his 16th birthday, still coping with an impairment that affected his vision since early childhood, Ben signed up to train as a volunteer firefighter. Two years later, he also became an emergency medical technician.

"A little baby died in his arms after he pulled the baby out of a car," Amy said. "I don't know why he never told us; he was just a humble man."

While lending a hand to his fellow citizens was fulfilling, Ben thought he could do even more. As he struggled to decide between becoming a police officer and going to college, his father, recognizing his son's dedication to duty, suggested a military career.

"My husband and I don't regret that at all," she said. "It's something (Ben) wanted to do."

When the Army raised concerns about Moore's vision and ordered further testing, Ben could have easily moved on.

"He had to go to the recruiting office a few times and really fight for it," Amy said.

After finally passing his vision tests, Ben left for boot camp, and came back "a totally different man than when he left," according to the soldier's mom. A year later, in April 2010, the mature, battle-ready soldier would deploy to Afghanistan. But first, his older brother, Patrick, had a favor to ask.

"Patrick proposed to his now-wife and asked Ben to be his best man," she said. "Ben was ecstatic."

On Jan. 12, 2011, with roughly 60 combat patrols under his belt thus far during the deployment, Ben asked a soldier to give him a Bible before returning to the battlefield to sweep for roadside bombs.

"We think Ben had a premonition," his mother said.

As the Moores brought Ben's flag-draped casket to his hometown from Delaware's Dover Air Force Base, the ambulance he once drove, along with a Bordentown city fire truck, followed closely behind. On bridges, firefighters stood atop their trucks to salute one of their own.

"Every single overpass on I-295 had an American flag," Ben's mom recalled.

When Ben's personal effects were returned to his loved ones, they were stunned to find a notebook containing a handwritten speech that he planned to deliver at his brother's wedding. Ben saved a typed version to his laptop on Jan. 10, just two days before his death.

"Remember to always live, laugh, love, and have no regrets ... never look back at the hard times," Ben wrote. "Always make the best of life like you do now. Cheers."

Instead of dreaming about becoming firefighters, soldiers, or leaders, little children in Bordentown now strive to be like Spc. Benjamin Moore. After all, Ben is now the city's honorary mayor.

"His death has affected many lives, and you could tell by the outpouring," Ben's mother said. "It helped us, but it also helped them to be able to have a hero."