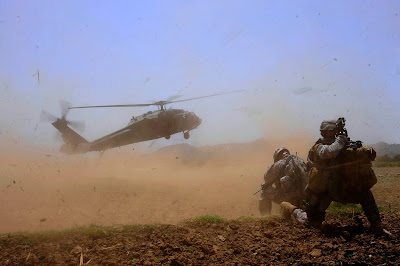 By any measure, it has been a painful start to the weekend in Afghanistan, where Saturday is not a day off work for U.S. forces. NATO's International Security Assistance Force announced that six American troops have died around the country. Two were killed in roadside bomb attacks in southern Afghanistan, while four were killed in three separate Saturday assaults on the eastern front.

Each of these six fallen heroes have unique personal stories and loved ones whom will miss them dearly. Despite these awful losses, which add to the pain of the deadliest summer of the war in Afghanistan, thousands of brave Americans will go out on more missions around the war-torn terrain and fight with valor in the coming days. As we enjoy weekend activities on the homefront, let's keep our troops in the forefront of our minds, and remind others of the consequential events happening far from our shores.

While the identities of the troops killed in action on Saturday will not be revealed until families of the fallen have been notified, the Pentagon has announced the passing of seven more U.S. soldiers who recently died from injuries suffered in Afghanistan.

As always, The Unknown Soldiers will bring you as many stories as possible about these fallen heroes in the weeks ahead. In the meantime, we must compliment the steadfastness being shown by our troops on the battlefields of Afghanistan and Iraq with resolve here at home. We are all in this post-9/11 struggle against terrorism together.