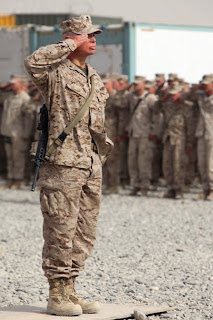 We see them in airports, often headed for destinations around the world. They stand in line with us at restaurants and movie theaters, or pass by on the jogging trail. Of course, U.S. troops serving in Afghanistan and Iraq are not supermen and wonderwomen incapable of feeling pain. Many miss home, and all are affected by the unique emotions of war.

Instead of filling airports, theaters, diners, and parks in the coming days, five families will grieve alongside hundreds of mourners in different cities around the country. If you live near any of these locations, check local newspapers for information about public processions and memorial services for your hometown heroes. As I discovered in April, joining together to personally honor a fallen warrior is an essential American experience.

Just moments ago, I watched several national media pundits debate whether we are 'losing' the war in Afghanistan. Had I been in the studio, I would have asked each panelist to recall how they felt on September 12, 2001. As an awakened, grieving nation yearning for justice after 24 hours of horror, we pledged to win this war, no matter how long it took. Fortunately, we still see citizens honoring that solemn vow, even though some were in elementary school when America was attacked. The men and women of the United States military will never give up.

Note: The above video is not posted as a product endorsement. The commercial aired only once, during the first post-9/11 Super Bowl on February 3, 2002.