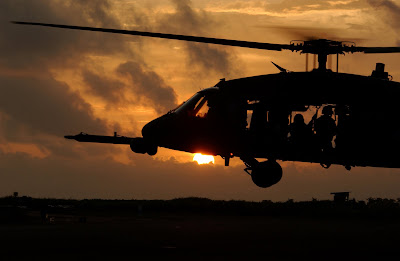 On June 9, Capt. David Wisniewski was busy doing what he did best: saving lives. Though the pilot had already flown over 280 combat hours, this HH-60G Pave Hawk helicopter mission produced some of the most intense moments of the airman's eight-year Air Force career.

"In one day, Dave was key in saving 40 people during the largest single mass casualty mission in Regional Command South," said Lt. Col. Thomas Dorl, commander of the 66th RQS. "This was no small feat as he braved enemy action and flew into a hot landing zone three times to save people."

Word quickly reached loved ones that Capt. Wisniewski was badly injured in the crash, along with Capt. Anthony Simone and Tech Sgt. Christopher Aguilera. To help keep friends and relatives updated, the Wisniewski family quickly launched a blog to chronicle the hectic series of events.

"We are getting ready for our flight at 6:55ish at night," the family wrote on June 10. "Getting anxious not really knowing what to expect 'til we get [to Bethesda Naval Hospital]. I am just glad he is safe and in good hands now."

Wisniewski, who was stationed at Nevada's Nellis Air Force Base, lived in Las Vegas with his fiancee. After graduating high school in Iowa, he attended the United States Air Force Academy in Colorado. Wisniewski enjoyed golfing, and undoubtedly appreciated being surrounded by beautiful courses at Vegas resorts. As a patient in Bethesda, he was surrounded by loving family members, who prayed and refused to give up. One special relative recounted a proud moment in the hospital on June 23.

"Today was an eventful day because David received his purple heart. It was an experience that I will not soon forget if I ever do. I am so very proud of my brother and all the military people that put their lives on the line for our freedoms every day. All military people are heroes in my book and I will not forget what each and every one does for me, my family, and all the other families out there."

Wisniewski underwent brain surgery in the days following the tragic crash, and fought hard during his recovery. The airman's strength allowed his family to have a bedside 31st birthday celebration on June 27.

"He again had many visitors and many gifts," the family posted on June 30. "One of the nurses that has been working with gave him a bottle of Kahlua and a bag of Oreos. We all know how much Dave liked his Oreos."

On July 2 at 10:12 p.m., Capt. David Wisniewski succumbed in Maryland to the catastrophic injuries he suffered half a world away. For three weeks, he gave his family, friends, and fellow troops time to hope, pray, reflect, and appreciate his extraordinary life.

"He passed away peacefully and is with the good Lord taking excellent golf lessons from the greatest golfer ever," the family wrote on Friday evening. Thank you all for the prayers we have all received during this trying time."

According to the United States Air Force, Capt. Wisniewski will be buried at Arlington National Cemetery. Back home in Iowa, Gov. Chet Culver paused on July 4 to salute the fallen hero.

"On this Independence Day, the news that another young person has died serving our country is a powerful reminder of the cost of our freedoms," Gov. Culver said. "I am deeply saddened to learn of the loss of Capt. Wisniewski, and my thoughts and prayers are with his family and loved ones."

This tragic helicopter crash, which has deeply affected the Air Force, will forever alter the Wisniewski, Flores, Gentz, Smith, and White families. We pray for them, while hoping Capt. Simone and Tech Sgt. Aguilera make full recoveries from their wounds. These men saved an immeasurable amount of Americans, Iraqis, and Afghans during their distinguished military careers, proving that words like "hero" can never be overused when talking about our valiant troops. They died so others could live, and we are grateful.