Letter to the troops 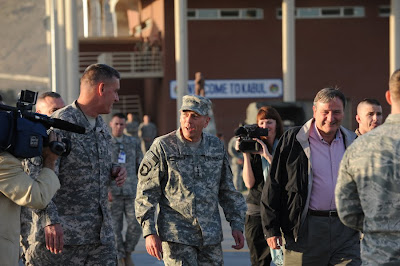 Shortly after arriving in Afghanistan, commanding Gen. David Petraeus sent the following letter to troops serving in the war zone:

We serve in Afghanistan at a critical time. With the surge in ISAF strength and the growth of Afghan forces, we and our Afghan comrades have a new opportunity. Together, we can ensure that Afghanistan will not once again be ruled by those who embrace indiscriminate violence and trans-national extremists, and we can ensure that Al Qaeda and other extremist elements cannot once again establish sanctuaries in Afghanistan from which they can launch attacks on our homelands and of the Afghan people.

This has been a hard fight. As you have soldiered together with our Afghan partners to reverse the Taliban momentum and to take away Taliban safe havens, the enemy has fought back. ISAF and Afghan Forces sustained particularly tough losses last month. Nonetheless, in the face of an enemy willing to carry out the most barbaric of attacks, progress has been achieved in some critical areas, and we are poised to realize more.

This effort is a contest of wills. Our enemies will do all that they can do to shake our confidence and the confidence of the Afghan people. In turn, we must continue to demonstrate our resolve to the enemy. We will do so through our relentless pursuit of the Taliban and others who mean Afghanistan harm, through our compassion for the Afghan people, and through our example and the values that we live.

Together with our Afghan partners, we must secure and serve the people of Afghanistan. We must help Afghan leaders develop their security forces and build their capacity to govern, so that they can increasingly take on the tasks of securing their country and seeing to the needs of the Afghan people.

This endeavor has to be a team effort. We must strive to contribute to the “Team of Teams” at work in Afghanistan and to achieve unity of effort with our diplomatic, international civilian, and Afghan partners as we carry out a comprehensive, civil-military counterinsurgency campaign

We must also continue our emphasis on reducing the loss of innocent civilian life to an absolute minimum. We must never forget that the decisive terrain in Afghanistan is the human terrain.

Protecting those we are here to help nonetheless does require killing, capturing, or turning the insurgents. We will not shrink from that; indeed, you have been taking the fight to the enemy and we will continue to do so. Beyond that, as you and our Afghan partners on the ground get into tough situations, we must employ all assets to ensure your safety, keeping in mind, again, the importance of avoiding civilian casualties.

I appreciate your sacrifices and those of your families as we serve in a mission of vital importance to the people of Afghanistan, to our nations, and to the world. And I pledge my total commitment to our missions as we work together to help achieve a brighter future for a new country in an ancient land.

A PDF capture of the letter shows a separate, handwritten message from the general: "It is an honor to serve with you." Please keep Gen. Petraeus and all the brave men and women serving in Afghanistan in your thoughts and prayers.