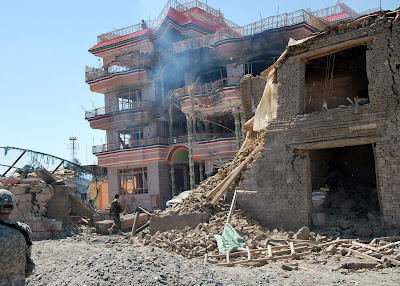 After the deadliest month of the war in Afghanistan for U.S. and coalition troops, violence continues to be heavy on the ground. NATO's International Security Assistance Force is confirming six more allied casualties, including five Americans, around Afghanistan. At least 14 NATO troops have been killed so far in July, after more than 100 died in June.

While the tragic loss of so many fine Americans is incredibly difficult to bear, there are many positive stories from the front that are generally not covered by the mainstream press. In the various newsrooms I worked in, military press releases were usually dismissed as "propaganda," while reports of civilian casualties, with Taliban or Iraqi insurgents exaggerating or fabricating statistics, were often taken quite seriously. The vast majority of journalists I've met at major networks and wire services are antiwar. Everyone is entitled to their opinion, but when reporters and producers generally don't distinguish between the U.S. military and terrorists who intentionally murder women and children, it's a problem.

This ISAF story is a good example of why coalition forces are the good guys. Over the weekend, troops found and disabled an improvised explosive device in a soccer field where Afghan children often play. According to ISAF, an anonymous tip was provided to Afghan and NATO security officers.

"It's hard not to believe this was an attempt to target local children or Afghan families who play on this soccer field," said a Combined Joint Special Operations Task Force - Afghanistan (CJSOTF-A) team sergeant involved in the response.

For the next year, or whatever length of time combat operations continue in Afghanistan, this war will be bloody and difficult. Yet as fair-minded Americans, we know our troops are completely dedicated to destroying al Qaeda and the Taliban, while doing everything in their power to minimize civilian casualties. Terrorists will continue planting IED's in markets, strapping bombs to innocent civilians, kidnapping and beheading contractors, and using children as human shields. To realize the importance of victory, we must be honest about the enemy we are fighting. The idea of evil once again dominating the country where the 9/11 attacks were planned is morally abhorrent and strategically unacceptable.