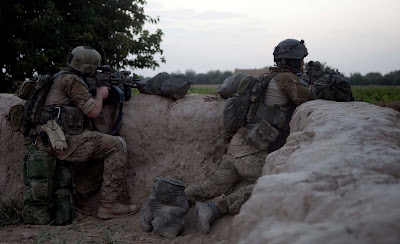 While painful increases in Afghanistan war casualties have been difficult to bear, reports from the front Monday morning make clear that our military is aggressively pushing ahead in Kandahar. While the American public may not be fully engaged, our men and women in uniform are committed to nothing less than total victory.

Freelance journalist Conor Powell, who has embedded several times with U.S. troops, just appeared on Fox News with new video of a dramatic gun battle today in the city's Zhari district. Appearing at about 6 p.m. local time, Powell said the area, where wanted Taliban leader Mullah Omar once lived, is a hotbed for insurgents. To win the war in Afghanistan, terrorist elements in Zhari must be destroyed.

While the media's overall coverage of Afghanistan has been lackluster, brave journalists like Powell have my utmost respect for risking their lives to bring the story home. He will be appearing on Fox News throughout the day to discuss his crew's experience in the middle of today's violence. We pray that all American troops involved made it safely back to base after another tough day in the field.

Meanwhile, over the weekend, the Pentagon identified nine more U.S. servicemembers recently killed in action around Afghanistan. Hailing from Orefield, Pennsylvania all the way Napa, California, these young men all grew up to make their country enormously proud. Their selfless contributions to victory in the post-9/11 struggle against terrorism will never be taken for granted.