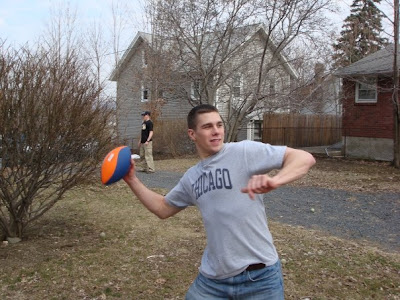 All the world's a stage,
And all the men and women merely players;
They have their exits and their entrances;
And one man in his time plays many parts

"Chris really was an exceptional guy. I still remember Jacques' soliloquy that he delivered so well when we put on As You Like It [the first] year, in addition to his great song writing and guitar playing."

The famous speech, while cynical and somewhat dark, is noteworthy for spelling out seven ages of manhood: infant, schoolboy, lover, soldier, justice, old age, and death. While more optimistic than the character he played, an examination of 1st Lt. Goeke's life shows that he closely followed William Shakespeare's blueprint. He had a busy childhood in Apple Valley, Minnesota, teaching Sunday School, playing intramural football, and learning the guitar. But his ultimate goal, which was always in mind as he methodically studied history and the Bible, was to serve his country in the military.

"You could tell in 2004 when he graduated that year that this was a kid who exhibited a type of not only excellence in the classroom, but also a form of quiet civility that people were really drawn to," added [school administrator Joe] Wycoff.

WCCO-TV, which spoke to Apple Valley High School officials, reports that the schoolboy had recently advanced to Shakespeare's next stages of life. The station's article said Goeke married a beautiful bride about 18 months ago after graduating sixth in his class at West Point. A deployment to Afghanistan with the 1st Battalion, 508th Parachute Infantry Regiment, 4th Brigade Combat Team, 82nd Airborne Division, Fort Bragg, North Carolina would come next.

According to the Department of Defense, 1st Lt. Goeke was killed one week ago in Kandahar. He died alongside Staff Sgt. Christopher Stout and Staff Sgt. Sheldon Tate when terrorists attacked an Afghan National Army facility with rocket-propelled grenades and small arms fire.

In addition to his wife, Goeke leaves behind his mother, father, and siblings, who grieve in private but publicly salute their loved one's passion for God and the American flag. James Shreve, who works in the Commandant of Cadets and counseled Goeke as a student, wrote on Facebook that the future soldier was "a remarkable young man that had the world in the palm of his hands."

"He did it right! God Bless you and your Family. Be Thou At Peace."

1st Lt. Christopher Goeke was well on his way to advancing to Shakespeare's fifth age: justice. He almost certainly would have returned from the battlefield with wisdom and an even bigger perspective on the world he volunteered to defend. From Apple Valley to Kandahar, family, friends, teachers, students, and soldiers are remembering a leader who seized the opportunity to act on the world's biggest stage. If only he had more than 23 years to complete his honorable journey. 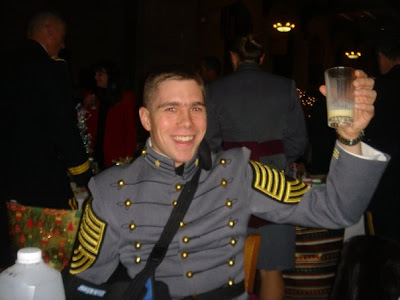