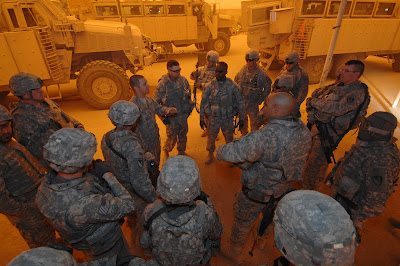 I recently had the privilege of interviewing retired 1st Lt. Jim Kirchner for a recent USO piece. During our conversation, I was struck by the vast differences between Kirchner's 2005 combat tour and his late 2009 return with Operation Proper Exit, which is funded by the USO and executed by the Troops First Foundation. The wounded veteran explained that Iraq is a much safer place because of the sacrifices of U.S. troops, and also a change in mindset among many Iraqis. Many are sick of violence and division, and are coming together to make their country a better place.

Of course, thousands of Americans are still serving there and face danger on a daily basis ahead of the March 7 national elections. The Pentagon has announced two casualties from Operation Iraqi Freedom, which is being renamed Operation New Dawn, over the past 24 hours:

The two soldiers were killed in separate incidents. Sgt. Spencer died Thursday at Landstuhl Regional Medical Center in Germany after being wounded at Combat Outpost Marez on February 20. Cpl. O'Leary was killed Tuesday in a Fallujah vehicle crash. We thank both of these brave American warriors for their service.