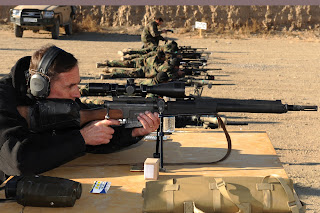 Gen. David Petraeus, Iraq war hero and now the head of U.S. Central Command, does not seem to be spinning Operation Moshtarak or the war in Afghanistan. The general, who says he is a "realist," predicts another 12 to 18 months of difficult fighting to clear Helmand province of Taliban and other terrorists. But make no mistake, Petraeus told NBC's Meet The Press that the American public should brace for heavy casualties.

Visit msnbc.com for breaking news, world news, and news about the economy

We already know that Petraeus' somber words ring true, as a high volume of new casualties have been released by the Pentagon. Yet as the general reminds us, we all must remember why we are in Afghanistan, and that Osama bin Laden, Mullah Omar, and other terrorists who threaten the world still may be there.

"We're in Afghanistan to ensure it cannot once again be a sanctuary for the kinds of attacks that were carried out on 9/11."