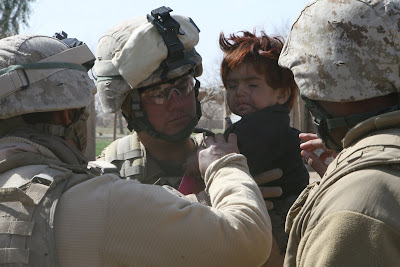 The American media won't be talking very much about Operation Moshtarak the next 36 hours. That's because Tiger Woods is holding an 'apology' news conference on Friday, which many news executives see as ratings gold. U.S. troops, who are busy fighting terrorists and helping Afghans like the little boy pictured above, will once again take a back seat to the celebrity flavor of the week.

Across the pond, the BBC has a very helpful map and timeline to help its readers keep track of the day-by-day events of this crucial joint mission. Today's report says U.S. Marines are facing stiff challenges, like heavy machine gun fire and a brutal enemy that uses civilians as human shields. Yet despite the resistance, U.S., British, and Afghan forces continue to advance in Marja and Nad Ali.