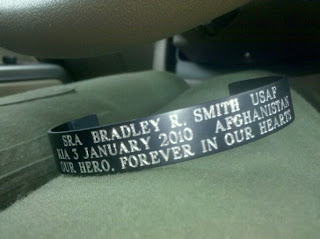 The Unknown Soldiers has been following the story of Senior Airman Bradley Smith since the hero was killed in Afghanistan on January 3. Unfortunately, this important story of battlefield sacrifice took an unthinkable turn the day before SrA Smith's Fort Carson memorial service, when his dog tags and other irreplaceable items were stolen from his wife and mother's shared rental car outside a Colorado restaurant.

Thanks to attention from newspapers, local TV stations, and blogs, police have announced an arrest in the case. While this news is certainly positive, another suspect is on the run, and the stolen mementos have still not been returned to grieving widow Tiffany Smith. KRDO-TV reports that Denard Thompson, 29, is accused of trespassing and conspiracy to commit theft. According to the article, alleged accomplice Dwain Boyd, 22, is wanted by police on charges of felony theft, first degree criminal trespass and conspiracy. Anyone with information is urged to call 719-390-5555.

Let's all pray the dog tags Senior Airman Bradley Smith wore while he gave his life for his country are returned to his mourning family, especially so his young daughter, Chloe, can hold them in the palm of her hand as she grows up.