'You're going to write the next chapter of our history' 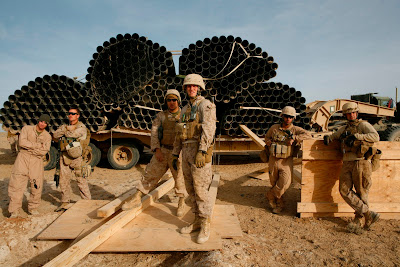 While much of America is shoveling snow or watching the opening ceremonies of the 2010 Winter Olympics, a key chapter in the war on terror is beginning to unfold.

At 2 a.m. in Afghanistan's Helmand Province, or 4:30 p.m. at New York's Ground Zero, 15,000 American, Canadian, British, French, and Afghan troops launched a significant offensive that you may have read about before on this blog, Operation Moshtarak. Coalition forces plan to overwhelm the southern city of Marja, which has a population of about 125,000 and is flooded with terrorists and Taliban forces.

The Army and Marines did not keep this key operation a secret, as they strategically tried to scare insurgents away from civilians, hoping they would then funnel into areas already controlled by the United States and our allies. The enemy fighters who stayed will be brought to justice. Military commanders have said repeatedly that this mission is to protect innocent people who live in Marja, who have been advised to stay inside during the intense battles that are now taking place.

A major concern, of course, is the bombs the terrorists have been planting before and after they learned of the planned invasion of Marja. Top commanders, while confident in the mission, have said they are extremely concerned about the IED threat the troops face. Yet once Helmand Province is under complete coalition control, which will be accomplished after Marja falls, hopefully there will be fewer and fewer posts on this site about U.S. servicemembers being killed by roadside bombs, and Afghan civilians being kidnapped, murdered, or enslaved.

Gen. James Conway, Commandant of the Marine Corps, flew into Helmand Province to address Marines before they put their lives on the line for Americans, Afghans, and each other during this critical operation. His speech begins about two minutes into the below video. Yet the most compelling aspect of the footage, which was produced by Cpl. Jenn Calaway, are the shots of Afghan troops listening to an American general's speech. We are helping this country rid itself of terrorists who have endlessly attacked them, as well as America and its global interests. Operation Moshtarak must succeed. As Gen. Conway assures us, it will.