Moshtarak: The weeks ahead 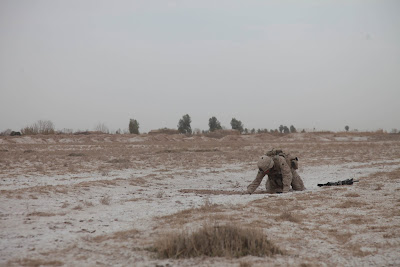 The combat phase of Operation Moshtarak could be over in about ten days, but insurgents still pose a major threat to coalition troops who worked so diligently to secure Marja. That's the view of Gen. Stanley McChrystal, commander of the International Security Assistance Force in Afghanistan, offered in the below military video, produced by Petty Officer 1st Class Mark Schultz.

While pleased by how quickly his highly-trained units were able to secure the city, Gen. McChrystal expects the Taliban and al Qaeda to 'test' the new security structure in the coming weeks. As the above photo shows, Americans are still in danger, digging beneath the ancient sand to clear the area of roadside bombs planted by terrorist groups. The exceptional bravery and sacrifice of the men and women who helped seize this area from the Taliban should never be taken for granted.

Multiple sources indicate that Operation Moshtarak could be a prelude to an invasion of Kandahar later this year. Without the heroic efforts of Pfc. Kyle Coutu and his fellow warriors, the coalition would have an even tougher fight ahead. Our country is fortunate that so many of our brothers and sisters volunteer to do this crucial work.
Posted by Tom Sileo at 10:31 AM