The wave of the future 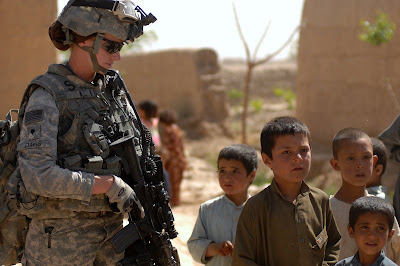 Back in February, The Unknown Soldiers relayed reports of a late-2010 offensive aimed at destroying Taliban elements in the southern Afghan city of Kandahar. According to Voice Of America and other news sources, the crucial mission will begin in June, with the goal of removing terrorists from the city before Ramadan begins in August.

As the above photo of Spc. Dawn Davis shows, U.S. troops are already bringing supplies to Afghan civilians in advance of the battle. Spc. Davis, a truck gunner in the 782nd Alpha Company, also provided security for the area, while U.S. forces met with Afghan troops to continue planning the Kandahar offensive.

Like Operation Moshtarak, protecting civilians, who are often used as human shields by the Taliban and al Qaeda, will be a top priority while winning this important battle. But the similarities will also be unfortunate, as the risks to American troops during this planned combat wave are real and tragic. As this site tries to convey to its readers, casualties are not just statistics or names routinely listed deep within a newspaper. They are real people with extraordinary stories, who sacrifice everything so children like the ones pictured above can have a chance at better lives. Many U.S. troops are also parents, who hope in the back of their minds that their children will never be asked to volunteer for war.

This site sends its sincere best wishes and prayers to all U.S. troops in harm's way, while also projecting complete confidence that their hard work will lead us to victory in Afghanistan and Iraq.