A Vegas show worth seeing

Las Vegas is full of glitter, gambling, and stars. Monday, the city welcomed home some real celebrities who bet on a sure thing: freedom.

A story by Sgt. Mike Getten on the Nevada National Guard's website recounts the dramatic sunrise homecoming of the 1/221st Cavalry Squadron, which completed a year-long deployment to Afghanistan. About 400 soldiers marched down part of the strip before arriving at the luxurious Mandalay Bay Hotel and Casino, where a ceremony was held in front of ecstatic family and friends.

"I am really happy to be home. My son was born in December and I just held him for the first time 10 minutes ago," said Spc. Franklin Vilaseco while smiling and admiring his infant son. “We finished our mission, and now we get to spend some time getting reacquainted with our families. I couldn’t be happier.

"If it wasn’t for the support my family gave me during the deployment, it would have been a lot tougher than it was."

The squadron, which mostly deployed to Laghman province, suffered no casualties in a year in Afghanistan. As anyone who regularly reads this site knows, that is a very fortunate outcome, and a testament to the hard work and dedication of these brave soldiers.

In a city often celebrated for its sins, Las Vegas should be thanked for honoring America's true heroes in a ceremony that ended in prayer. There is no doubt that while bowing their heads, most soldiers thanked a higher power for reuniting them with their families, and asked that fellow troops still serving in the war zone receive the same blessing. 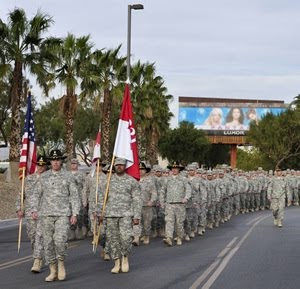