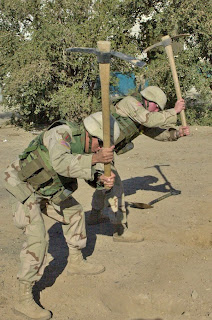 As the American media obsesses over every aspect of Tiger Woods' return to professional golf, the public should be getting an important reminder of the difficult work being done every day in Iraq by approximately 100,000 U.S. troops. Contrary to conventional wisdom, the war is not "over," despite the incredible accomplishments of American and coalition forces to spur a dramatic turnaround in the war-torn country.

Tragically, two American soldiers were killed yesterday in northern Iraq. There is not much information in the U.S. media about the attack, but CNN, to its credit, did post a short article on the incident early this morning. The post said five fellow soldiers were also injured in the violence. After military messengers deliver the painful news to the families, and the Pentagon releases the solemn information, The Unknown Soldiers will salute the bravery and sacrifice of these American heroes.

There is nothing wrong with watching The Masters or being captivated by Tiger Woods. I am a big sports fan myself. But there is a problem when so many American media outlets fail to report on an attack that will permanently alter the lives of seven U.S. troops and their families. The military, and the public it protects, deserve better.