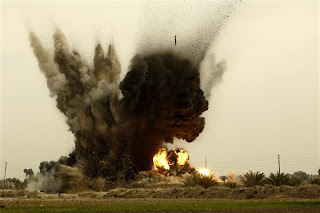 If the information provided by Iraqi Prime Minister Nouri Al-Maliki today is verified, coalition troops may have reason to celebrate another significant victory against al Qaeda.

According to news just breaking on FoxNews.com and other prominent sites, Abu Ayyub al-Masri and Abu Omar al-Baghdadi may have been killed in a joint U.S.-Iraqi rocket attack on their hideout near Tikrit. But as the article notes, Iraqi officials have made similar announcements in the past, and American officials need time to verify these new claims. Let's all hope these reports are true, as al-Masri and al-Baghdadi are brutal killers of U.S. and Iraqi troops, as well as innocent civilians.

Eliminating these terrorists would be a major accomplishment before the withdrawal of U.S. combat forces from Iraq in September. Voice Of America reports that Gen. Ray Odierno believes plans for about 45,000 of the 95,000 American troops left in Iraq to come home are firmly on track. A full withdrawal is expected to be finished by the end of 2011.

The war in Iraq has been a difficult struggle for the U.S. military. We thank all the brave volunteers who have served there for their dedication, and mourn the many warriors who sacrificed everything on the country's battlefields. We all have a duty to treat these fellow Americans like heroes, and ask those coming home what we can do to make their transition as smooth as possible. Victory in Iraq will not be complete unless the men and women who fought with honor are fully supported by all of us.