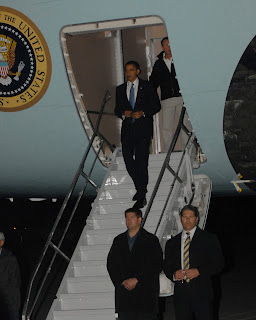 This site tries to avoid politics, as beltway bickering distracts from real sacrifices being made by extraordinary Americans every day on the battlefield. Yet a president visiting the men and women he's asked to fight should not be viewed through a partisan lens. It's an act that goes beyond symbolism, because it gives our uniformed heroes a boost in morale. Most importantly, it reminds them that despite all the divisions at home, we remain united in support of our military.

According to CNN, President Obama landed in Kabul at about 7:30 p.m. local time, or 11 a.m. eastern. He met with Afghan President Hamid Karzai before speaking to U.S. forces at Bagram Air Base. Like President Bush's surprise Thanksgiving visit to Iraq in 2003, the trip was unannounced and cloaked in high security.

Despite the media's ratings-driven reluctance to continue covering Iraq and Afghanistan with a consistent sense of urgency, there is no decision a president can make that is more important than sending our brothers and sisters to war. Regardless of whether we agree with the orders given by President Obama or his predecessor, the commander-in-chief and the citizens he governs must stay engaged with these conflicts. Of course, we also have a duty to thank the men and women who carry out the president's mission with selfless bravery and dignity.

America is at war. Today, because of the unexpected nature of this presidential visit, our country gets a much-needed reminder.