It happens every day 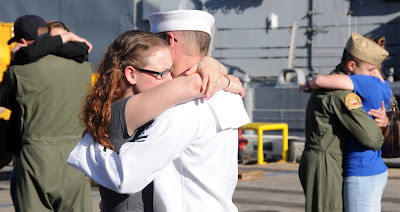 Just after dropping off my mother-in-law at the airport this afternoon, I saw something very powerful in the corner of my eye as I pulled away from the terminal. It was an American soldier embracing a woman much older than him, possibly his mother, as he left for his flight. Where was he headed? Iraq? Afghanistan? Germany? Japan? A base inside the United States? While I wouldn't dare intrude on such an emotional, personal moment, I wish I could have asked.

I've written before about airports, and how seeing so many men and women in uniform walking around terminals is just about the only thing that makes waiting for a flight a positive experience. But today, seeing the soldier forced leave a loved one behind changed my view slightly. It's tough to look at two people with tightly intertwined lives, and ask yourself why they have to be apart.

Imagine being separated from your spouse, child, sibling, or best friend for a year or more, especially if you weren't sure you'd ever see their smiling face again. The emotions a servicemember must go through, especially while walking through airports just moments after saying goodbye, must be tremendously difficult as he or she prepares to fly into an unknown land.

Every single day since September 11, 2001, these moments have been occurring in airports, train stations, and bus depots across America. These gentle, sometimes uncertain farewells should remind us that every single volunteer in our armed forces is sacrificing precious time with the people they love most. While doing so, they protect our freedom to spend our lives with those we care about.

For this, we owe.