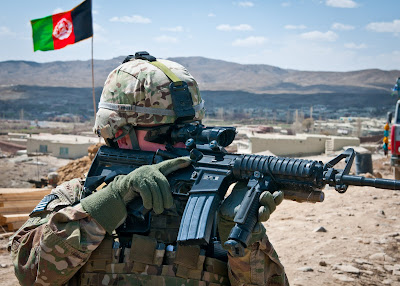 Here is a news flash for pundits and politicians. There is a real war affecting millions of Americans, and it's not being fought here at home. It's being fought thousands of miles from our shores in Afghanistan, where our country's volunteer warriors make sacrifices every day while separated from their families.

In a time of war, one would think some of our culture's most influential voices would be more responsible with their language. But as politicians see polls labeling Afghanistan as a non-factor in the upcoming election, the war one percent of our population is fighting becomes less and less of a factor in their daily decision-making process.

As for the press, we now live in a country where a Mega Millions jackpot receives far more media attention than the deaths of at least 9 U.S. troops so far in April as a result of fighting in Afghanistan. While all of us should take pride in being Americans, it is getting harder and harder to respect the once-proud profession of journalism.

As politicians scream about the "war on women" and "war on religion," let's remember that our troops are still fighting an enemy that once made those slogans a reality in Afghanistan. Before the U.S.-led invasion commenced on Oct. 7, 2001, as remnants of the World Trade Center and Pentagon still smoldered, women were being beaten, raped, and enslaved by the Taliban regime that harbored Osama bin Laden and his fellow terrorists. Additionally, any Afghan who did not display strict allegiance to the Taliban's hateful interpretation of religion risked execution.

The men and women of the U.S. military did a selfless, heroic thing by forcing these radicals and terrorists from power. While all Americans are free to debate whether U.S. forces should still be in Afghanistan ten and a half years later, that is the beauty of living in a free country with strong ideals protected every day by brave men and women willing to die for a cause bigger than themselves.

How quickly some forget the sacrifices of our troops and their families, which allow certain politicians and journalists to waste time trying to create wars at home. Yet every time frustration builds, we should think about our injured troops and veterans, including those battling invisible wounds, as well as families of our fallen heroes. For them, this country's real post-9/11 wars will never end.

In closing, I want to repeat a quote by Nikki Altmann, who lost her husband, Staff Sgt. Joseph Altmann, in Afghanistan on Christmas Day.

"Six months from now, people won’t be calling to see how I’m doing," the fallen hero's wife said. "At one point, it will all stop."

Mrs. Altmann's words, uttered less than four months after her husband was killed in action, are heartbreaking. But they should also inspire us to rise up and demand that this country reunite around the heroes who volunteer to protect us. As one percent puts everything on the line so 99 percent can live in relative peace and security, all of us should be playing a role in displaying a national outpouring of support and gratitude.

To our country's esteemed politicians and journalists: this includes you. 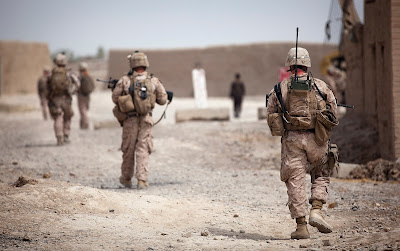