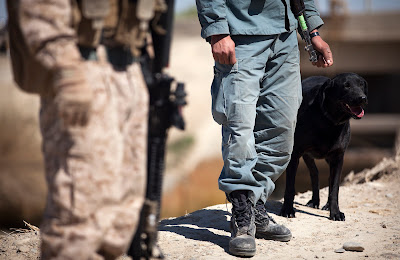 Lance Cpl. Stuart Ferreri is just old enough to legally buy a beer in the United States. Yet the Marine, 21, is already on his second deployment to Afghanistan.

"It's a little easier this time around," Lance Cpl. Ferreri, speaking by phone from the war zone, told The Unknown Soldiers. "Last year, you didn't really know what to expect...you'd go out every day not knowing what you'd see."

As our conversation began, Ferreri was quick to point out that his combat experience doesn't quite match that of Fancy, the improvised explosive device detection dog that's always by his side.

"This is her third deployment now to Afghanistan," the Marine dog handler said.

Fancy isn't just wandering around wagging her tail in the sands of Helmand province. Along with the Marine holding her leash, the black Lab is saving lives.

While the picture painted of Afghanistan by some media pundits is one of complete chaos, the Marine said the district he's deployed in is showing major signs of improvement after years of sacrifices by American, Afghan, and coalition troops.

"We've been on pretty much every patrol," he said. "There've been a few hits here and there, but nothing too serious."

The Guard Force Platoon of the 3rd Marine Battalion, 3rd Marine Regiment often provides guidance to Afghan security forces during combat patrols in southern Afghanistan. As the Marines walk carefully through villages, Ferreri and Fancy can almost always be found up front.

"(We're) just clearing the way for the guys behind us to make sure everything's safe," the Marine explained. "They don't have to watch their step; they can keep their eyes open for any other insurgents out there."

War is unpredictable by nature, forcing Ferreri to be very cautious with Fancy, especially in unfamiliar places.

"I've had people throw rocks and whatnot at my dog, so I've had to become real protective over her during a lot of different patrols," he said.

When there are a few moments to relax, the Marine's first priority is spending some quality time with Fancy that doesn't involve searching for bombs.

"I've had dogs growing up and whatnot, and pretty much just learned to treat them the same way," he said. "Although they are military working dogs, at the same time they are dogs too, and you have to have fun with them now and then...throw the ball around."

To the handler and every other Marine in the squad, Fancy is one of them.

The Marine also shares a close bond with his family. As he saves lives with Fancy in southern Afghanistan, they are anxiously awaiting his return to Northglenn, Colo., which is about 15 miles north of Denver.

"They're just as worried as they were last year," Ferreri said. "But I think they kind of have a better grasp around it — the fact that this is their second time dealing with it too. My mom struggles a lot with it, though," the Marine continued.

After he gets home, Lance Cpl. Stuart Ferreri plans to exit the Marine Corps, finish school, and enter the work force as a two-time Afghanistan combat veteran. He's also looking forward to seeing Peyton Manning quarterback his beloved Denver Broncos after hearing about the stunning off-season development while stationed overseas.

"Hopefully we'll be good," he said.

Before this American warrior is able to kick back and watch some football, there will be more patrols through Afghanistan's Helmand province. But as the risk-filled days go by, the Marine knows Fancy will be by his side.

"As far as my squad goes, they've really bonded around the dog," the Marine said. "After (several) months together, you become like a family." 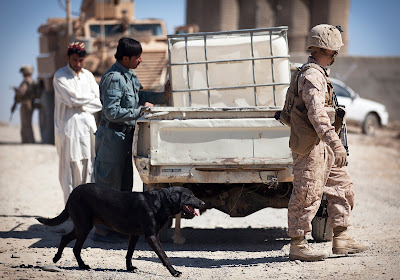