That day, Staff Sgt. Kenneth Mayne asked his mom to send some homemade Beef Jerky over to his unit in Iraq. He wasn't surprised when she said a care package was already on its way.

Not long after their conversation, Michelle's son was dead.

"I had spoken to him on the phone just hours before," Staff Sgt. Mayne's mother told The Unknown Soldiers.

Despite an incredible turnout by northern Colorado communities to honor the fallen soldier, which Michelle and her husband Dan deeply appreciate to this day, the grief-stricken mother felt like she missed her own son's funeral.

"I don't remember most of it," she said. "I think you spend the first year in a fog."

Michelle never expected to be the mother of a fallen hero. After what she described as Kenneth's troubled teenage years, Michelle said her son may have saved his own life by joining the Army.

"Some people look at me like I'm crazy when I say that because it got him killed," she explained. "But because of the choices he was making (in high school), he would have gotten killed sooner."

The 1st Brigade Combat Team, 4th Infantry Division soldier served honorably during the 2003 invasion of Iraq, and his Army career was distinguished. Kenneth's fellow troops, whom Michelle and Dan keep in very close contact with, still praise him to this day.

"All my best leaders at the time were associated with Mayne," Capt. Geoffrey Shraga recently said in a U.S. Army story written by Sgt. Breanne Pye. "He was the kind of leader that people looked up to and learned from."

Most Americans had lost focus on the war in Iraq by the time an improvised explosive device took the lives of Michelle's 29-year-old son and Pfc. Bryan Thomas, 22, of Battle Creek, Mich. As is the case almost four years later with our country still at war in Afghanistan, the national media is caught up with every minute detail of an upcoming presidential election, which often leaves the sacrifices of our troops languishing in the darkness.

"America needs to wake up and be aware of what's going on," Michelle said. "We still have people in harm's way — there's still a war going on — and we need to be supportive."

Michelle and Dan's passion for our military has led them on a journey they never could have anticipated. On April 13, the Arvada, Colo., couple started walking from Fort Carson, home of the 4th Infantry Division, to Marseilles, Ill., home of the Middle East Conflicts Wall Memorial. In all, Michelle and Dan will walk over 1,000 miles.

"I am so proud of our military, the people who voluntarily join to defend my rights," Michelle said. "I want my son to be as proud of his family now as we are of him."

Michelle and Dan have gotten involved with a Colorado-based charity called American Military Family, which supports troops and veterans with particular emphasis on assisting the spouses, children, parents, and siblings who shoulder the burdens of multiple deployments at home.

"It was my husband's idea for us to do this walk," Michelle said. "He wanted to do something bigger than himself."

"The awareness toward the military is very important," Dan added. "I will feel (the walk) is a success if when anyone sees a veteran, they give them a hug and say thank you."

"I can't change what happened to my son; I would give my life if I could, but I can't," she said. "But what I can do is help the people who served, and help the people who've chosen not to serve realize that this is all going on out there."

As Michelle Benavidez walks through the Great Plains, inching closer to a memorial wall on which her son's name is etched, she is asking her country to honor its protectors.

"Our biggest fear is that you'll forget them," she said. "I don't mean just my boy; I mean all of them." 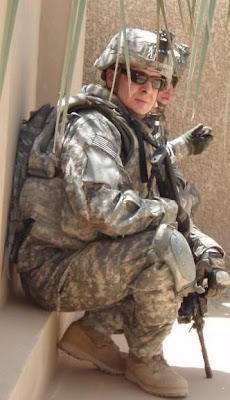