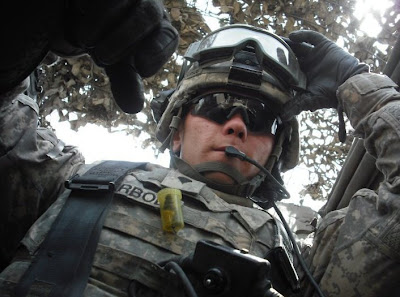 Unable to move after being shot by an enemy sniper, Sgt. Jamie Jarboe lay in the blood-soaked dirt of Afghanistan on April 10, 2011. As more bullets whizzed above his head during the chaotic battle, the soldier looked to the heavens and made a promise.

The 27-year-old wounded warrior recounted the harrowing attack, which left him paralyzed, to The Unknown Soldiers on Jan. 12. Speaking in a soft voice and frequently pausing to catch his breath, the soldier explained why he so desperately wanted to make it out of Afghanistan alive.

"I was thinking about my wife and kids," Jamie said. "I just got married."

After being pulled off the battlefield by his brothers in arms, Jamie was still picturing his wife and two stepdaughters as a surgeon covered his face with an oxygen mask. All he wanted was to see their faces again, and after an unconscious journey around the world, he did.

"I woke up at Walter Reed," Jamie said.

The soldier's wife, Melissa Jarboe, described the horror of seeing her badly wounded husband for the first time, while also explaining how the experience forever altered her mindset.

"Before this, I never knew there was a Walter Reed and I never knew what a wounded warrior was," Melissa said. "And now I know too much."

Through sheer courage and tenacity, Jamie and Melissa Jarboe were able to celebrate their first wedding anniversary this past Valentine's Day in a hospital room. And just like the day they were married, the couple had big dreams.

"I'd like to be putting together the pieces and be a family again," Jamie said. "I love my wife and I want to be back with the kids."

"There are no words that can describe what this last week has been like knowing that my husband and I would never have a life we always dreamed of," Melissa posted on the "Prayers for Sgt. Jamie Jarboe" Facebook page.

Even though they knew death could be on the horizon, the Jarboes chose to share the most challenging days of their lives with others. In addition to hundreds of Facebook posts, Melissa sent me this e-mail, along with a moving photograph, the night before her husband died.

"Jamie is alive and fighting for his life," she wrote on March 20. "I'm (holding) vigil by his side, loving and kissing him every second of the day!"

As more than 12,000 Facebook followers learned of his passing, with heartfelt messages and tributes pouring in, all I could think of was Jamie's voice. The evening we spoke, the soldier and his wife were preparing for a cross-country flight for yet another surgery. Even though it clearly hurt to talk, the wounded warrior spent almost an hour sharing his experiences.

"It's all very surprising to me," Jamie said about the cards, letters, emails and Facebook messages he was receiving from around the world. "Sometimes I'm almost taken aback when I get words of encouragement and support."

The death of Sgt. Jarboe, who also deployed twice to Iraq, is felt from Afghanistan all the way to Kansas' Fort Riley, where the 4th Squadron, 4th Cavalry Regiment soldier was stationed, and to Frankfort, Ind., where many family and friends live.

For the rest of their lives, Melissa and her daughters will rely on faith while trying to heal from an unforgettable 11-month ordeal.

"Both girls forfeited their Halloween, Thanksgiving, and Christmas and spent (the holidays) in the hospital with us," she said. "Never once have they complained, Tom."

Many of us take living in America for granted. All Sgt. Jamie Jarboe wanted was the privilege of dying here. After making some cherished new memories with the people he loved most, it was time to make good on his promise.

"By the grace of God we were given 11 more months to live life and for that I can't be selfish or greedy," Melissa posted on March 21. "We lived every day like we were dying ... because inside we were." 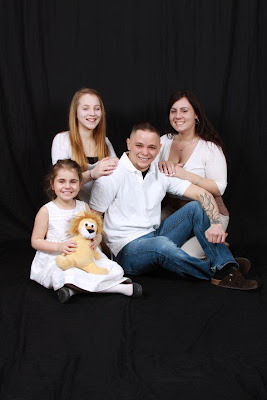