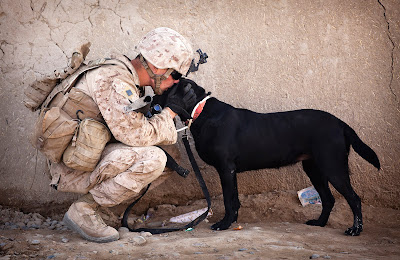 Marines like Cpl. Kyle Click risk their lives in strange countries to protect the United States of America. They also sacrifice some of the best years of their lives to become part of a cause that's bigger than themselves.

For Cpl. Click, his days involve searching for improvised explosive devices with his trusted, loyal detection dog, Windy. Led by its 22-year-old handler, this highly skilled dog has saved countless coalition troops and innocent Afghan civilians from being killed and maimed by the bombs that cowardly terrorists plant all around Afghan villages.

When Cpl. Reece Lodder, a Marine combat correspondent who was profiled by The Unknown Soldiers before deploying to southern Afghanistan, sent me the above and below photographs, I was extremely grateful for three things.

First, I was relieved Cpl. Lodder and his fellow Marines are safe. Second, I was overwhelmed with appreciation that he'd even think of e-mailing me from the battlefield. Third, his amazing shots help remind us that as politicians and the media try to create their own narrative about the war in Afghanistan, all that really matters is that our country has thousands of brave men and women in harm's way. And as Lodder's brilliant pictures prove, they are doing an extraordinary job.

Tragically, at least three Americans have been killed in Afghanistan so far this month. According to the Pentagon, all three casualties occurred in the volatile south.

Even though the New York, Washington, and Los Angeles-based national media rarely talk about the war in Afghanistan unless a controversy erupts, these three combat deaths sadly demonstrate that this ongoing conflict affects major cities like Chicago and Denver in addition to small ones like Marble Falls, Texas, population 6,000. At this hour, families in all three cities are grieving, and we should be mourning along with them.

Thousands of miles from our shores, Cpl. Kyle Click is holding a leash and guiding Windy the dog through treacherous post-9/11 terrain. Somewhere nearby, Cpl. Reece Lodder is snapping photos and sending them home to a country that has largely turned the page on the war he is risking his life to document.

For those of us at home, the easy way out of Afghanistan is looking the other way. The noble thing, however, is to do what generations before us have done: devote every ounce of our energy toward supporting those who sacrifice everything for our freedom and security. 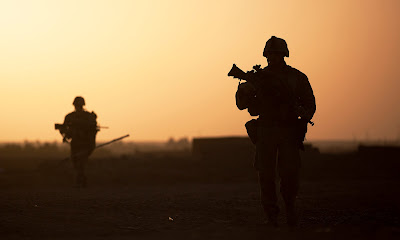