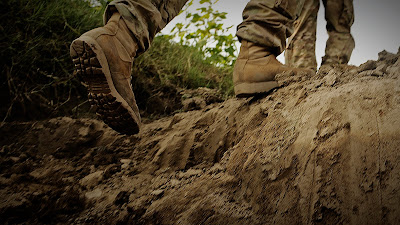 During every step American warriors take through Afghanistan's rugged post-9/11 battlefields, the ground beneath their boots is inundated with the unknown.

Instead of fighting our superior troops head on, most of America's enemies bury bombs underground or even under piles of trash. These crude, deadly improvised explosive devices target Americans and Afghans alike, and have killed countless people, including innocent children.

August 2011 was the deadliest month of the entire war in Afghanistan for U.S. troops. As you know from reading this blog, the impact of each service member's death is staggering; from grieving husbands, wives, children, siblings, and friends at home to devastated brothers and sisters in arms still serving overseas. As these good people cope with the sharp knife of their loved ones' short lives, we cannot say enough prayers for those shouldering the heaviest price of war.

Despite an August of unprecedented pain for our military in Afghanistan, our troops still serving there are not dead men walking. They are driven, determined men and women who feel each and every ultimate sacrifice deep inside their heroic hearts. There is no bottle to store the time they have spent away from their families, nor is there is a pill to cure what our military has endured every single day since terrorists attacked our homeland on September 11, 2001.

Al Qaeda and the Taliban are terrorist organizations full of faceless cowards. Their foot soldiers wear no uniforms and fight for no cause other than to brainwash, murder, and terrorize. Therefore, when an explosive ordnance disposal technician tells me that he or she disabled an improvised explosive device planted near an Afghan school, I view that as a great victory for our military, America, and the world.
It is impossible to measure how many future Afghan leaders have been saved by our military, which at the same time, hunts terrorists with relentless force and unmatched skill.

As I type this post on board a commercial jet, my sadness is mixed with pride. Nothing can ever prepare you for looking into the eyes of a mother who has lost a son or daughter, and I know I will eventually speak with some military moms who will never forget the tragic month of August 2011.

At the same time, I am enormously grateful to live in a country where despite a decade of tragedy, our troops and military families are still ready and willing to fight. No human being is perfect, but in my view, many of our men and women in uniform do things that define the word.

To those who have served and are serving: thank you for keeping my family safe. It is impossible to repay you for your selfless commitment to freedom and the flag.

To those who have lost a love one: thank you for your unparalleled strength. While you never wanted the Gold Star your family has earned, it symbolizes what we all wish on while gazing into the night skies as children. Your hero is our hero, and a grateful nation stands ready to help your family in a time of unimaginable trial.

Right now -- at this very second -- U.S. troops are walking, running, and driving through the mountains, deserts, roads, and dirt paths of Afghanistan. God, please bless the ground beneath them. 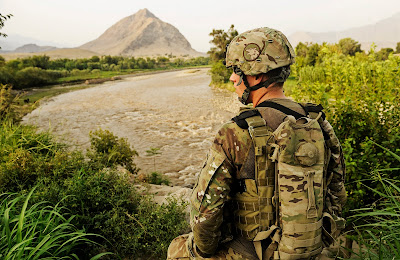