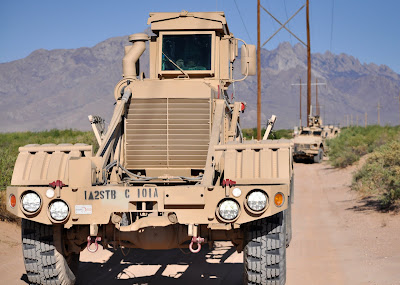 It's easy to complain about heavy traffic congestion that clogs roadways around so many American cities. The next time you're about to pound on the steering wheel, however, be thankful that part of your job doesn't involve driving over bombs.

From to 2006 to 2007, Sgt. Jacob Probst was driving a "Husky" mine detection vehicle around an incredibly dangerous part of Iraq.

"That was just absolutely amazing," Sgt. Probst told The Unknown Soldiers. "We got to see Anbar province, Iraq, go from literally the worst place in the world to being the light for Iraq."

When the Army reservist arrived in western Iraq, the war had reached an absolutely critical phase. Terrorists in Anbar Province were threatening to change the course of the entire bloody conflict, as al Qaeda wantonly murdered troops and civilians throughout the region.

On Sept. 1, 2008, the U.S. military formally transferred Anbar Province to the Iraqi government, which would have been unthinkable just two years earlier. While violence in Iraq did not end with the handover and the conflict continues to this day, Probst, who is too humble to take any credit, knows he and his fellow troops helped change the course of history.

"It all started shifting while we were there," the soldier said.

When asked what Iraq was like when his deployment started, Probst, speaking by phone from Wisconsin's Fort McCoy, let out a sigh so deep it was louder than the machine gun fire from training in the background. "Iraq 2006," he said in jest, before a serious pause.

"My job, specifically, was to drive over a bomb," Probst continued. "You're driving about two or three miles an hour on the side of a road or on a road, and I have a metal detector mounted on my vehicle, basically right underneath me."

With a naked eye, Probst tried to spot improvised explosive devices, the leading killer of American troops in Iraq and Afghanistan. At the same time, under intense pressure, he would listen for a buzzing sound from his vehicle's metal detector.

"Then you basically stop, back up, and pinpoint exactly where you got the hit on the metal detector and spray paint the bomb," he said.

After explosive ordnance disposal technicians eventually blew up the terrorist-planted device, either on-site or in a secure location, Probst would go back to his base with an incredible feeling.

"If you found even one, that's at least three Marines' lives saved, because we worked with the Marines almost exclusively over there," he said. "But then also, you always kind of forget that the Iraqis — they got hit with IEDs almost all the time too."

A native of Watertown, Wis., Probst joined the Army Reserve after high school — when the United States was in the midst of two wars. The soldier admits that despite knowing the risks, he wasn't exactly sure what was coming next.

"I wanted to go to school, but I felt like I could serve my country," Probst said. "I didn't know exactly where that would lead me."

Today, with memories of a year driving over bombs, Probst is enrolled at the University of Wisconsin-Milwaukee, where he is pursuing a degree in high school special education. I spoke to Probst in the middle of the Army's "Best Warrior Competition," which pits soldiers against one another in everything from academics and athletics to being able to perform under the pressure of battle or without sleep.

Sgt. Jacob Probst still enjoys the challenges of the military and says he feels very fortunate to be home safely, pursuing his dreams with a wife of three years.

"I'd love to have some kids," he said with an audible smile.

In a difficult economy, those of us who have jobs to go to each morning are lucky. But before we grumble about choking traffic and high gas prices, we should also feel fortunate that we don't have to worry about bombs being buried beneath the road.

The valiant men and women of the U.S. military, serving with honor in Afghanistan and Iraq at this very moment, make life at home a lot less complicated. 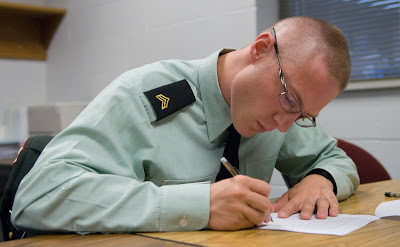