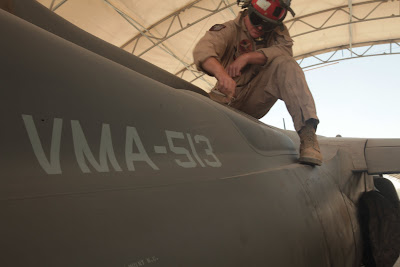 During a deadly, tragic summer in Afghanistan, where we stand on the war politically is irrelevant. All that matters is standing beside our troops and their families as they shoulder the heaviest burdens of America's longest war.

Cpl. Zachary Mills, 22, is an ordnance technician with Marine Attack Squadron 513, stationed in Kandahar. His job is to arm Harriers, the groundbreaking military jets capable of lifting off vertically without forward speed.

It was 6:30 a.m. Kandahar time when Cpl. Mills spoke via satellite phone to The Unknown Soldiers, and the temperature outside a hangar where the Marine usually works was already creeping toward 100 degrees. When asked how he copes with doing a difficult job amid unrelenting heat similar to conditions inside a furnace, he shrugged off the question.

"I just drink a lot of water, I guess," the Orlando, Fla., native told The Unknown Soldiers. "I'm normally stationed out in Yuma (Az.), so this is not bad at all."

Mills was fully aware of the risks involved when he joined the military in January 2008. More than three and a half years later, he is deployed to one of the world's most dangerous regions. As the wars in Afghanistan and Iraq both continue, the proud Marine said he has no regrets about his decision to enlist.

"I basically wanted to better myself," Mills explained, "and I thought the military would be the right way to serve your country. I think that's a very important thing, especially during these times."

With this summer shaping up to be the deadliest of the entire Afghanistan conflict, which has lasted almost a decade, Mills said spirits in the war zone are in fact very high.

"Morale is good," he said. "Once you get (Marines) in gear, it motivates them to work hard."

Capt. Pete Hegseth is an Army National Guardsman currently deployed to Kabul, where he is an instructor at a counterinsurgency training center. The soldier, who has also deployed to Iraq, said he becomes exasperated when media pundits inside air-conditioned newsrooms suggest that because of increased risk, the military is tired or unwilling to fight.

"This 'talk' is a complete misnomer," Capt. Hegseth said in an email from Afghanistan to The Unknown Soldiers. "Troops are here because they want to be here, and we believe in what we're doing."

Hegseth, 31, knows first-hand about the strains of multiple deployments. Coupled with the visible and invisible wounds of war, these issues are very serious concerns for U.S. troops, veterans and military families. But according to Hegseth, challenges should not be mistaken for weariness.

"We're not 'tired,'" Hegseth, the former executive director of Vets for Freedom, an organization committed to victory in Afghanistan and Iraq, wrote. "We're savvy, committed, war-tested, and more experienced than ever. America's military today is the greatest fighting force the world has ever seen, and the only way we will 'break' our military is if we don't give it the resources it needs to fight and support it needs to win."

Hegseth's steadfast belief in America's post-9/11 mission in Afghanistan doesn't mean this summer has been easy.

Before Hegseth's latest combat deployment, the soldier and his wife welcomed their first child, a son who is now 13 months old. Hegseth said he misses his little boy tremendously and worries about his wife, who must spend a year raising their child on her own.

Yet because of his soul mate's support and strength, as well as the opportunity to see his son via Skype, Hegseth remembers what he is fighting for.

"I'm able to talk to her regularly and see my little son grow up," Hegseth wrote. "He sees me on the computer, lunges for the screen, and says 'Dada.'

"It melts my heart and reminds me why I'm doing this," the soldier continued. "(It's) for them and for the simple joys that all Americans cherish."

At this hour, as more flag-draped caskets come home from the battlefield, our brave men and women in uniform are standing guard around the world. No matter how difficult, we must set aside our differences and stand by them, even from half a world away. 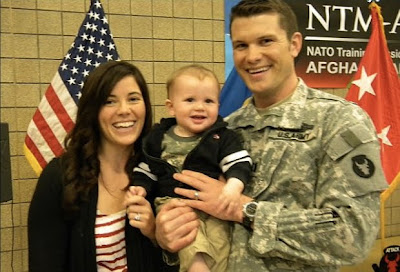