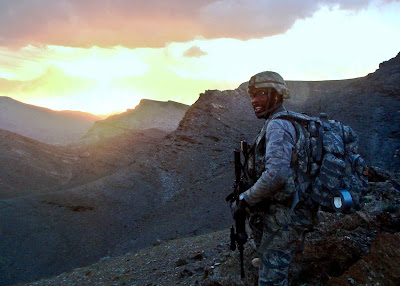 To be an explosive ordnance disposal technician, one must possess uncommon physical and emotional strength. Think "The Hurt Locker" — with all the Hollywood stripped out.

With sweat dripping from their foreheads, U.S. troops disabling roadside bombs in Afghanistan and Iraq know that any given moment could be the end. Perhaps that's why Tech Sgt. Daniel Douville, 33, lived every day like it was his last.

While pictures of this brave airman show an imposing, muscular figure, a conversation with his wife of 14 years, LaShana Douville, left no doubt about the potency of his character. When asked how her family is coping with their hero's tragic death on June 26 in Afghanistan, LaShana was calm, composed, and strong.

"We're doing OK," she told The Unknown Soldiers. "We're taking things one day at a time."

After Tech Sgt. Douville's death, which the Pentagon said was the result of injuries suffered when an improvised explosive device blew up on the border of the volatile Helmand Province's Nad'Ali District, the most pressing concern was the couple's three children, Jadelynn, 14, Ayjah-Danielle, 12, and Daniel Jr., 9.

"I asked (Jadelynn), 'How are you doing? Because you're really quiet,'" LaShana, 33, said. "She said she's being what she knows her dad would want her to be, and that's strong."

Mom is equally proud of their youngest daughter.

"My 12-year-old has really stepped up," LaShana explained. "She's realized how important this is and what happened."

As the only son of a larger-than-life figure, Daniel Jr. shared a special bond with his father. While praising their son's tenacity during a time of tragedy, LaShana spoke of an empty spot inside the boy's big heart.

"My 9-year-old understands, but he's having the most difficult time," she said. "He doesn't have Dad."

At his father's memorial ceremony, the Bronze Star Medal awarded to his dad was pinned on Daniel Jr.'s shirt, just above his heart. As always, Mom was by his side.

Even while disabling enemy bombs by day during his combat deployments, Douville would still manage to be a part of parent-teacher conferences by night.

"He would call in from Afghanistan to be on speakerphone," LaShana said. "From the beginning, he wanted to take care of me and our kids."

During what turned out to be their last conversation, Douville calmed his wife's nerves from half a world away. On a Saturday, he phoned to let her know he was safe after not being able to call during the previous days' grueling back-to-back missions.

"He hadn't really slept," LaShana recalled. "He mentioned a third mission but said he wouldn't be going."

On Sunday, he was killed.

"Obviously, he went on that third mission," she said.

Without the love and support of relatives, friends, and fellow airmen, times would be even tougher at the Douvilles' Fort Walton Beach, Fla., home. But during the most difficult weeks of her life, nothing has been more important to LaShana than her faith.

"That is exactly what has helped me through all of this," she said. "I found the strength I never knew I had."

LaShana said that as a humble warrior, her husband rarely spoke to her about his heroic accomplishments. After he was killed, she realized that in between those parent-teacher conferences, he was doing amazing things.

"He saved a lot of lives out there and put a lot of bad people away," LaShana said. "I've heard so many people say so many times that he was the best."

While being the best he could be on the battlefield was very important to Tech Sgt. Daniel Douville, nothing mattered more than his family.

Through all the family milestones still to come, LaShana said with absolute certainty that her husband, a man of deep faith, is watching over his wife and children.

"Not only was he my husband," she said. "He was my best friend. He was a good person."

LaShana Douville still feels her husband's strength from the heavens above. 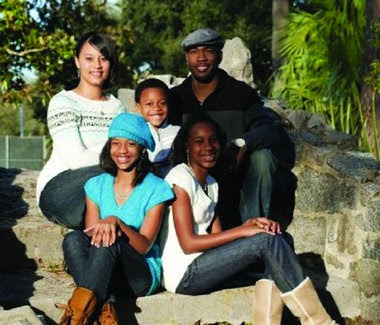