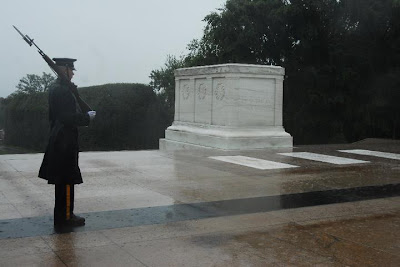 Even during a Category 1 hurricane, the Tomb of the Unknowns at Arlington National Cemetery is guarded by a brave American soldier.

The caption for the above photo, which was taken on Saturday and released by the U.S. Army's 3rd U.S. Infantry Regiment (The Old Guard), notes that since April 6, 1948, Tomb Sentinels have stood guard at the Tomb of the Unknowns for "every second of every day." Unknown soldiers from World War I, World War II, and the Korean War rest beneath the sacred spot.

While we hope and pray for everyone's safety during Hurricane Irene, even as the national media sensationalizes the story, I have a feeling that the soldiers guarding the Tomb of the Unknowns will be just fine. After all, they know that at this very moment, their brothers and sisters in arms are risking their lives for our freedom in Afghanistan and Iraq.

Like al Qaeda and the Taliban, Hurricane Irene is no match for the United States military.