At 11:35 p.m. eastern time, an announcement by the President of the United States allowed us all to say five words that we have yearned to shout into the sky since September 11, 2001.

Tonight is for every American murdered in New York, Virginia, and Pennsylvania on that horrific September day. Tonight is for their families. Tonight is for all the innocent people around the world that al Qaeda has butchered and enslaved.

But tonight is also for every man and woman who, before and after that terrible September day, volunteered to defend this nation from evil, which Osama bin Laden personified during his despicable life. You, the brave soldiers, sailors, coast guardsmen, airmen, and Marines of the United States Armed Forces, are our heroes.

I am particularly emotional thinking about the families of so many fallen heroes you have read about on this blog. When I've asked family members and friends of our departed warriors why their loved ones volunteered to serve, I can't tell you how many times I've gotten a simple response: September 11, 2001. The sacrifices of those brave brothers and sisters in arms were undoubtedly on the minds of the valiant Americans who stormed the terrorist compound in Pakistan, and ultimately brought Osama bin Laden to justice.

Through nine and a half years of victory, defeat, struggle, and sacrifice, the men and women of our military never quit. Often with little fanfare, they stayed focused on the mission to make this world safer for our children. While the mission isn't over, tonight is as close to V-E Day and V-J Day as our generation will likely ever experience.

On September 11, 2001, New York firefighters heard screams for help as ashes and bodies fell from the gigantic twin towers looming above them. Rather than run for cover as fires burned and the buildings buckled, they ran inside, trying to save as many lives as possible, regardless of the consequences to their own.

On September 11, 2001, service members and civilians at the Pentagon were just getting into work when a plane slammed into the headquarters of our nation's defense. So many people who dedicated their lives to service were murdered at the Pentagon that day, robbing their spouses and children of precious time that they would have cherished.

On September 11, 2001, the passengers of United Flight 93 stormed the plane's cockpit and gave America its first victory of the war on terrorism. With no regard for their own lives, they spared the lives of even more Americans on the ground in our nation's capital.

The men and women of the United States military refused to let their fellow Americans down. To these brave volunteer warriors, as well as their friends in the intelligence and homeland security communities, every day of the past nine and a half years has been September 12, 2001.

Inspired to serve, hundreds of thousands of American heroes boarded planes and ships and went wherever they were ordered to fight. Thank you to every single American service member, veteran, and military family member for your selfless dedication during this epic struggle against the darkness of evil. Because of you, there is light, and we are free. 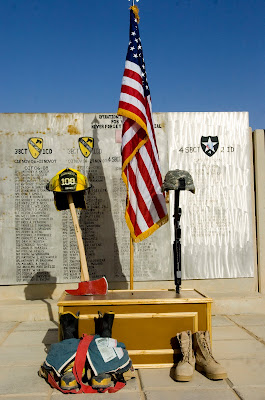