Dark clouds loomed above Arlington National Cemetery as I arrived at the hallowed grounds on Tuesday afternoon.  Even amid heavy construction, a walk down Eisenhower Drive, with white headstones of thousands of heroes on the left and right, is one of the quietest, most reflective walks an American can ever take.

This was my fourth visit to Section 60, where many honorable patriots of America's post-9/11 battlefields rest for eternity.  Tragically, the sacred section continues to expand, as more valiant men and women make the ultimate sacrifice for our freedom.

One of those selfless patriots is Sgt. Sean Callahan, who you can read more about in this week's Creators Syndicate newspaper column, which is posted here on Saturday mornings.  The 23-year-old Marine was killed April 23 in Afghanistan's Helmand province, and I wanted to pay my respects to Sgt. Callahan and his fallen brothers and sisters in arms before the column's release.

At almost the exact same moment that I bowed my head at Sgt. Callahan's place of rest, hard rain began to fall, giving the two sets of flowers left beside the hero's temporary grave marker a much-needed drink.  As raindrops mixed with the tears welling up in my eyes, I saw two people, perhaps a mother and son, standing nearby in the steady showers.  Someone they cared about had given everything in a war zone so we could experience a peaceful day in the nation's capital which, as documents seized from Osama bin Laden's hideout reinforce, remains firmly in the crosshairs of terrorists.

Even after bin Laden's capture, his followers and enablers are still relentlessly targeted by the most highly-trained fighting force in the world.  While there are more victories for the United States in Southwest Asia than defeats, these missions come with extraordinary risk.  In the past four days, the deaths of nine American troops in Afghanistan have been announced by the Department of Defense.

While families of the fallen decide where their loved ones are buried, it is possible that some or all of these men could join Sgt. Callahan in Section 60 in the coming weeks.  I urge every reader of The Unknown Soldiers to visit Arlington National Cemetery, and specifically the heroes of the past decade, during your next visit to the Washington, D.C. area.  I especially believe that school-aged children should be led through Section 60, so they begin to understand why they say the pledge of allegiance as the morning bell tolls.

During my walk back down Eisenhower Drive, I saw a group of Marines getting on a bus after presumably assisting with a funeral.  At that moment, the clouds began to break.  Despite the terrible tragedies thousands of military families have experienced since September 11, 2001, there are still brave men and women willing to honor the memories of our fallen by continuing their work.

Sunlight began warming Arlington National Cemetery just before my departure.  As I left its grounds, I pivoted on the wet grass, turned around, and soaked in the patriotism one last time.  There is a reason we are free. 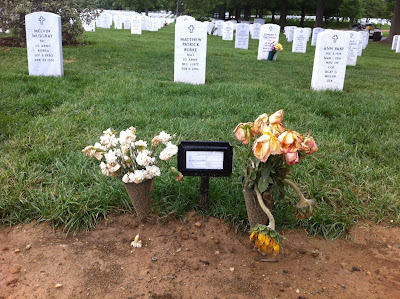