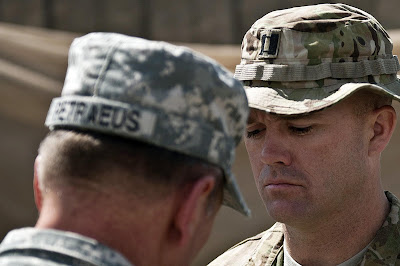 So far in 2011, hype surrounding the April 29 wedding of Prince William and Kate Middleton has probably attracted more media attention than the wars in Afghanistan and Iraq combined. As this British ceremony is force-fed to us by a ratings-hungry American press, perhaps we can take a moment to notice a ceremony of far greater consequence.

On April 11, Gen. David Petraeus visited Forward Operating Base Joyce in eastern Afghanistan. He was there to thank the battle-hardened soldiers of Task Force No Slack, who, along with so many other brothers and sisters of the 101st Airborne Division (Air Assault), have made an incalculable number of sacrifices on America's post-9/11 battlefields.

The Afghanistan War commander specifically wanted to shake the hands of Capt. Edward Bankston and Sgt. Joshua Bostic. During several chaotic firefights, beginning on March 28, these valiant warriors helped overcome hundreds of insurgents, a blinding snowstorm and the painful loss of six fellow soldiers to defeat Taliban forces in the area.

"They're all heroes," Tony Berry told The Unknown Soldiers. "They all did the same job; some made it home and some didn't."

As you may have read in last week's column, Berry's stepson, Pfc. Jeremy Faulkner, was one of six Screaming Eagles to not make it home from the eastern Afghanistan mission. In an emotional April 9 ceremony at Faulkner's Jonesboro, Ga., church, I had the honor of witnessing the soldier's Bronze Star being presented to his grieving family.

When Bankston and Bostic both received the Silver Star from Petraeus, with Afghanistan's deadly mountains as a backdrop, the emotions were overwhelming.

"I would trade all the medals to get our lost guys back," Bankston, who is from Decatur, Ga., reportedly said at the ceremony.

An article by Sgt. 1st Class Mark Burrell, who is doing incredibly valuable work by reporting for the Army from the front lines, explains how Bankston and Bostic earned our nation's third-highest military decoration.

Bankston, who was shot in the leg earlier in his third and current combat deployment, rallied fellow troops amid booming machine guns and rocket-propelled grenade fire, which tragically killed several soldiers among them.

"The way I look at it is that I was walking in the footsteps of heroes throughout the mission, so I was covered," Bankston said.

Burrell also reports that Bostic refused to leave the mission to seek medical care after he was wounded trying to pull one of his fellow paratroopers, who later died, to safety.

"I know the other guys would do the same for me," Bostic, who is from Spring City, Tenn., said. "It really wasn't a thought."

Petraeus has traveled all over Iraq and Afghanistan to personally attend these important ceremonies. He believes that if battlefield heroism goes unnoticed within the military and in the general public, then the contributions of this "new greatest generation" — as the general calls those to step up since Sept. 11, 2001 — will be forgotten.

"There's such a pace of operations, there's such a high tempo, that the last thing that our great soldiers, sailors, airmen, and Marines out there want to do when they come back from a mission is write each other up for awards," Petraeus said in October. "But we need to do that better, we need to capture the history of our operations better."

Every facet of this British royal wedding, from gowns and flowers to guest lists and gossip, is being captured by American journalists. For many weeks, our television, computer and smartphone screens have been filled with information that has absolutely no relevance to our daily lives, as ceremonies honoring men and women who protect us are almost completely ignored.

We don't need to watch a royal wedding in London to find heroes. Instead, we can do a better job noticing events like the one our media failed to capture in eastern Afghanistan, and line the streets of American cities when our heroes return home.