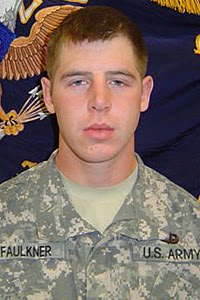 While listening to the haunting bagpipes of "Amazing Grace" during an April 9 memorial service honoring Pfc. Jeremy Faulkner in Jonesboro, Ga., I realized I had no idea what the 1779 song's famous lyrics, written by John Newton, actually meant. Faulkner's pastor, family, friends and fellow soldiers, who filled the huge church to capacity, helped clarify the beloved hymn's resonance.

"With a hail of fire all around him, Jeremy saw amazing grace," Rev. Ron Little said.

"Our enemy had grown too large, too bold, too capable to ignore any longer," Lt. Col. Joel Vowell, Task Force No Slack commander, told grieving soldiers in a dramatic eastern Afghanistan speech delivered the same day one of their own was laid to rest in Georgia. "Task Force No Slack met that challenge, and we destroyed and killed over 130 insurgent fighters and wounded scores of others in our biggest battle since Vietnam."

As I learned at Tara Baptist Church, Faulkner began training for his defining moment as a little boy.

Tony Berry, Faulkner's stepfather, knew "Remy," as many loved ones and buddies called him, since the future soldier was 11.

"He was one of those types of kids that made you mad one minute, but the next, he'd have you laughing," Berry told The Unknown Soldiers. "He loved being outside and camping, so he adjusted to Army life real quick."

Like so many U.S. troops, Faulkner developed an unbreakable attachment to his brothers and sisters in arms. Berry said he spoke to three soldiers from his stepson's unit at the memorial service.

"It's a bond that we can never know, unless you've been over there to share in it with those guys," Berry explained. "When one passes, the other one feels guilty, and they wish it was them."

Quotes from warriors who went into the fire with Faulkner on that treacherous day in Afghanistan were read aloud at the service.

"He was a very special person in my life," one mourning soldier said. "He could make everyone laugh and smile, even in the worst situations."

It doesn't get much worse than the ferocious battle that killed Faulkner and five fellow comrades and left many more wounded. Many casualties of those chaotic moments were just weeks from finishing their Afghanistan deployments.

"It's quite a shock to us," Berry said. "Being that close to coming home is just tragic."

In one of the service's most poignant moments, the fallen hero's mother, Judy Berry, and father, Joel Faulkner, were presented the Bronze Star and Purple Heart, awarded to their son posthumously.

The momentous events of March 29 in eastern Afghanistan received nowhere near the level of deserved attention from the national media. For too long, the public has languished in the darkness during the daily victories and struggles of America's post-9/11 conflicts, which marks a great injustice to those who serve and sacrifice.

"Our job is not over after today," Little reminded mourners at the service's conclusion.

Families of the fallen, as well as those wounded or suffering from the incalculable psychological toll of war, need more than our sympathy. They need — and merit — our constant focus.

"It is foolish and wrong to mourn the men who died," said renowned tough-as-nails Gen. George S. Patton, whose quote was read aloud at the service. "Rather, we should thank God that such men lived."

The grace shown by Pfc. Jeremy P. Faulkner and his fellow troops, who volunteered to serve during a time of genuine peril, is truly amazing.

"I'm going," the brave soldier said before heading off to war. "But if the worst happens, I know where I'm going."

Was blind, but now I see. 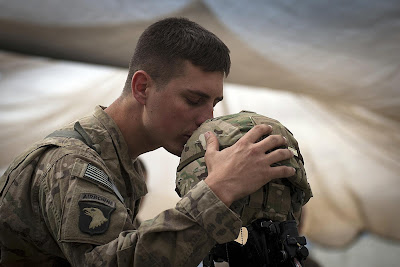