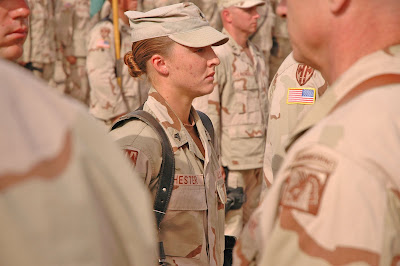 After becoming the first female soldier since World War II to be awarded the Silver Star, Sgt. Leigh Ann Hester was asked about the historic nature of her achievement.

"It really doesn't have anything to do with being a female," the humble hero told the American Forces Press Service in 2005. "It's about the duties I performed that day as a soldier."

Hester, now a police officer in Tennessee who recently re-enlisted in the Army National Guard, was only 23 years old when terrorists ambushed her convoy on Mar. 20, 2005 in Iraq.

After several soldiers in her military police unit suffered gunshot wounds, Hester, along with Sgt. 1st Class Timothy Nein, later awarded the Distinguished Service Cross, and Sgt. Jason Mike, later awarded the Silver Star, bravely charged out of their Humvees. The soldiers, putting themselves between the enemy and their exposed convoy, led a ferocious counterattack that killed 27 insurgents and led to the capture of seven more.

While Hester's remarkable story is one of the most prominent examples of post-9/11 heroism by a woman, many more should also touch the heart of a nation that often holds up actresses, singers and models as examples of women at the pinnacle of American society.

Spc. Faith Hinkley, 23, was excited about her upcoming return home when a rocket struck the Iraqi office building she was working inside on Aug. 7, 2010. The former high school cheerleader, who volunteered to leave her loved ones behind and serve our nation, returned home to Colorado in a flag-draped casket.

"As a soldier, she died fighting for our country," Chelsea Bowsher-Venable wrote to me four days after her best friend's death. "But through her passing, I know she will save so many lives just by inspiring others through her goodness, selflessness, and sincerity."

Sgt. Trista Moretti started Army basic training on June 12, 2003, less than three months after the invasion of Iraq. In a true act of bravery, she re-enlisted in 2005, one the conflict's toughest years, fully aware that a deployment was probably on the horizon. Moretti, who was known for her distinctive laugh and relentless pursuit of adventure, was killed in Iraq on June 25, 2007.

"I would have chosen Trista above almost all other soldiers I had the pleasure of serving with in the Army, to be the one watching my back in a foxhole," Austin Goodman posted on Facebook last month. "She was an awesome soldier, was hard to keep up with in physical training, and she had a huge heart."

While walking through Arlington National Cemetery on Jan. 21, 2010, I noticed a particularly striking headstone inscription:

It was the grave of Maj. Megan McClung, who I later learned was the highest-ranking female U.S. Marine to be killed in the Iraq war, and the first female U.S. Naval Academy graduate to die in combat.

The motto on her headstone, which embodied how McClung lived for 34 years, has guided me every day since. Her father, who also served in the Marines, told me about something he learned in the years following his daughter's Dec. 6, 2006 death that inspires him.

"Another indication of how Meg touched so many lives are the seven little girls running around now who were named after her," Mike McClung said in a Jan. 23, 2010 e-mail. "In at least one case (and maybe more), the wife did know Meg. I can just imagine the scene when the husband says 'honey, I would like us to name our daughter (after) a girl I once knew.'"

When Lt. Gen. John Vines awarded Sgt. Leigh Ann Hester and her fellow soldiers their medals in 2005, he said something that resonates six years later.

As my daughter grows up, she will not hear talk at the dinner table about Snooki, Britney, Paris or Lindsay. She will instead hear names like Leigh Ann, Faith, Trista and Megan.

Note: A correction was appended to this article. Maj. Megan McClung is the highest-ranking female Marine to be killed in the Iraq war, not the first female Marine to lose her life in the conflict.