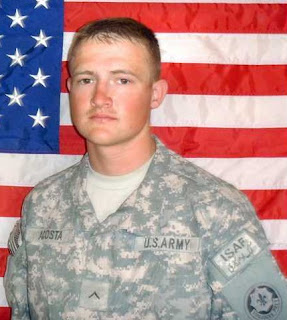 If you've seen the 1993 film "Rudy," based on a true story about a gutsy, undersized Notre Dame practice squad player who is carried off the field as a hero after the only game of his college football career, you probably haven't forgotten this scene.

"Rudy, are you ready for this, champ?" a teammate asks in the tunnel before the big game.

"I've been ready for this my whole life," Rudy responds.

"Then you take us out on the field," the player says.

On March 19, a different Rudy who once played football, Spc. Rudy Acosta, was asked by his sergeant to join him for an important mission on the treacherous battlefields of Afghanistan's Kandahar province. Acosta, a 19-year-old Army medic who loved his job, had his eye on eventually practicing medicine back home in Canyon Country, Calif., after serving his country.

"Instead of putting on a Band-Aid, he would really treat a wound," the soldier's father, Dante Acosta, told The Unknown Soldiers. "He'd really take the time to make sure a person was in good shape. That just spoke to his faith."

Rudy, nearing the end of his first combat deployment, also had faith in the Afghan people.

"His sergeant told me that when Rudy would help the Afghans they came across, he looked at them as people in need, not as potential enemies," his dad said.

By all accounts, Acosta was focused on his March 19 mission. Amid the relative calm of his base, he was also cracking jokes with a fellow soldier as they cleaned their weapons before heading into battle. Then, the battle came to Acosta and his friends.

"One of the guards walked past them, turned around from the hip and just started shooting," Rudy's father said. "I'm told that this guy was hired about nine or ten days prior. His intent all along was probably to hit as many soldiers as possible."

The terrorist, who reportedly infiltrated the base by working on it as a contractor, killed Rudy and a fellow soldier, Cpl. Donald Mickler, 29, before U.S. troops killed him. The tragic incident is under investigation. Four Americans were injured, including the soldier Acosta was kidding around with before a hail of bullets turned their laughter into screams.

Rudy's father spoke with his son's wounded comrade the night before our conversation.

"He has some movement in his toes, but there is nerve damage; this guy shot him up pretty good," Dante said. "This kind of thing is just terrible ... this kind of guy can't be armed on our bases."

The grieving father, while outraged by the way his son and Mickler died, spoke peacefully about Rudy's love for his parents, siblings, friends and God, as well as his decision to join the military.

"I felt very proud, and as a father, I was very nervous," Dante said. "He wanted to become a medic, and when he said he wouldn't settle for anything else, they let him."

Rudy, still a teenager, never let the hardening of his Army-strong biceps trump his sense of compassion.

"The last Sunday he was here, he left a note with one of our church's pastors," his dad said. "It does not say 'pray for me'; it says 'pray for the Afghan people' and 'pray for our soldiers.'"

Despite the cruel irony of his son dying at the hands of an Afghan terrorist disguised as a friend, Dante's patriotism and respect for the military is unflinching.

"I get choked up when I see the flag," he said. "I know — and now I really know — the sacrifice that has went on."

Between two packed Santa Clarita Baptist Church services, which many troops in Afghanistan watched online, and supporters lining Southern California streets, tens of thousands have paid their respects to Spc. Rudy Acosta, who never got his chance to take the field on March 19.

Chants of "Rudy, Rudy, Rudy," echo through the hit sports film's final scene as teammates carry their hero back into the tunnel. On March 20 at Delaware's Dover Air Force Base, fellow soldiers carried a real hero back onto American soil. The same chants echoed from the heavens.

Take us out on the field, Rudy. 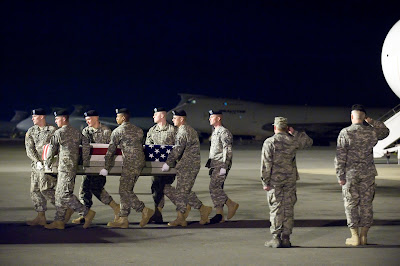