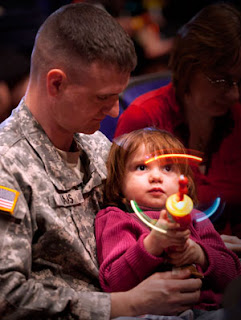 After attending Wednesday’s rehearsal of the Sesame Street/USO Military Family Experience kickoff event in Columbus, Ohio, I was thinking about the genius of the Sesame Street developers who created ‘Katie,’ the new character who tells Elmo during the program that her military family has to move, once again, to another base.

Since the character says so much about what children of our service members have endured since September 11, 2001, I set out at Thursday’s event to find a real ’Katie,’ who is living the story that Sesame Street has so vividly created for military kids, as well as children who may not realize why some of their friends have to move away. After about 90 minutes of searching inside the Franklin County Veterans Memorial auditorium, I came across little Isabella Haas.

As Isabella awaited the appearance of her favorite Sesame character, Elmo, her father, Army Maj. John Haas, told me that she had just celebrated her third birthday the day before the special performance in Columbus. Maj. Haas and his wife, Dawnann, also planned on enjoying the day with their daughter, because soon, the soldier will be headed to Afghanistan, where he will spend 270 days apart from his little girl.

When I asked Maj. Haas what it will be like spending so much time away from his wife and child, he visibly shuddered, graciously deferring to his spouse to answer a very emotional question.

Note: Click here to read the full story on the USO blog.