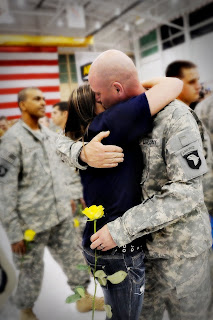 "This may be the highlight of this game," Fox Sports announcer Dick Stockton said after Sgt. Mark Foster stunned his wife, daughter and country with a surprise return from Afghanistan on the 20-yard-line of an NFL football stadium. During the Washington Redskins-Tennessee Titans game on Nov. 20, 2010, millions watched a tearful family embrace, filling their television screens with the raw emotions of war.

As the initial shock began to subside in the stands of Nashville's LP Field, the 101st Airborne Division paratrooper's spouse, Jodi, asked a dreaded question.

"When do you have to go back?"

Sgt. Foster, 38, hated having to tell his wife and youngest child that not long after Thanksgiving, he'd be back in a war zone.

"My 12-year-old daughter, Kayla, put it best — (rest and recuperation) kind of sucks when you're deployed," Mark told The Unknown Soldiers. "You have to go back and miss your family all over again."

Foster's feisty wife, who jokingly chastised her Army husband during our conversation for not doing enough laundry while he was home, wholeheartedly agreed.

"It was really hard," Jodi, 33, recalled. "It's almost like they tease you with R&R — they dangle him being home in front of you."

The sergeant had already been through four combat tours in Iraq, but the last 12 weeks of his first deployment to Afghanistan, after returning from his surprise trip home, were among the most difficult of his life.

"It was probably the longest three months I've ever spent, although they're always longer after leave," Mark said. "It was rough, it was cold and it snowed a lot."

On March 10, Jodi and three anxious kids stood near the Tennessee-Kentucky border at Fort Campbell, waiting for the first glimpse of a returning hero and his brothers in arms. This time, the family would reunite on an Army airfield instead of a football field, but there was still a minor surprise in store for the soldier's wife.

"I didn't recognize him at first because he lost so much weight over there," Jodi admitted. "The last few minutes waiting to get to hug him were tough, but it's great having him home."

As a career journalist who has never served in the military, I naively asked the soldier how he was enjoying his time off. The sergeant told me he went back to work at 5:30 a.m. the day after getting home.

"When we come back, there is a mandatory reintegration period," Mark explained. "But it's only a few hours a day, and then you get to come home and spend time with your family."

I asked the soldier how he is doing emotionally after his fifth overseas deployment in support of America's post-9/11 missions. Foster told me that loud noises and large groups of people make him uncomfortable.

"I'll be honest — the hardest part is going to work and still not having peace and quiet," Mark said. "It's nice to just play a video game or watch a movie without having anyone, even the kids, running around. That's the most overwhelming thing because I'm just not used to it."

Like so many military families around the nation, the Fosters are either dealing with being apart or moving around together. In the fall, they will transition from Fort Campbell to Fort Hood, a massive Army post about an hour from Austin, Texas.

"It's been an adjustment for all of us," Jodi said. "You get into a routine, and then you have to change the routine."

Sgt. Mark Foster, who struck me with his up-front, no-nonsense demeanor during our November and March conversations, said it's critical for a nation fighting in Afghanistan and Iraq, and now Libya, to comprehend war's impact on hundreds of thousands of American families.

"It's kind of like they get stuck holding the bag," the soldier said. "People have got to understand that when we leave, it's not necessarily because we want to. It's because we have to." 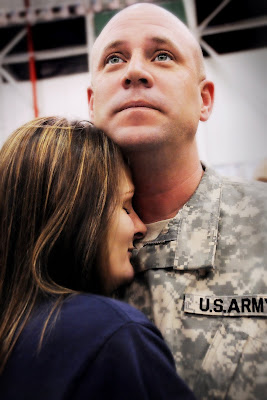