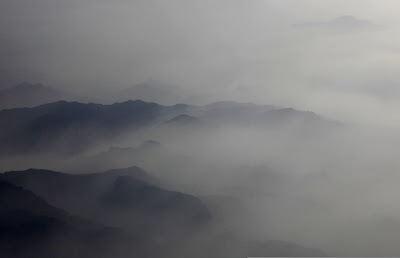 The above Army photograph, taken from a C-5 Galaxy cargo aircraft just before it landed at Afghanistan's Kandahar Air Field, is both magnificent and ominous. The same can be said for what many of our troops overseas are experiencing at this hour.

For an American service member, going to war is a rare opportunity to defend your country and put your training to the test against the enemy. But it can also be a scarring, horrific experience that permanently alters your life. As someone who hasn't served in the military, I cannot speak to what these men and women are going through. I can only guess that for some, it won't be easy to sleep tonight beneath the shadow of tomorrow's unknowns.

Since Friday, the Pentagon has announced the deaths of six U.S. troops in Afghanistan. From Illinois to Guam, families have been notified that flag-draped caskets carrying their loved ones will soon be greeted with solemn salutes at Delaware's Dover Air Force Base.

The colors in the picture above are appropriate, as war's daily events can sometimes be portrayed in black and white, when reality is often more akin to shades of gray. At this moment in Afghanistan and Iraq, some troops are engaged in fierce combat and some are playing video games. Some are happy, some are at ease, some are melancholy, and some are battling feelings of desperation. All are putting their lives on the line for future American, Afghan, and Iraqi generations, and deserve our gratitude and respect.