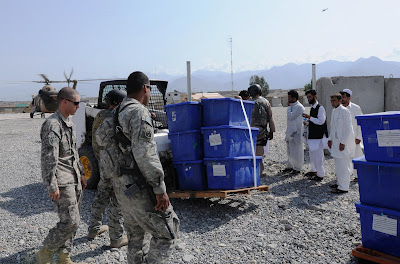 The polls have opened in Afghanistan, where about 2,500 Afghan politicians are on ballots for 249 parliamentary seats. As al Qaeda and the Taliban's totalitarian zealots fume in anger, Afghans will enter voting booths hoping for a smooth, legitimate outcome.

While Voice Of America reports that an apparent rocket attack hit Kabul early Saturday morning, terrorist efforts to derail the elections have failed due to the sacrifices of Americans, Afghans, and coalition partners determined to give citizens clear paths to polling places.

Of course, the road has not been easy. U.S. troops helped Afghans fend off the enemy while delivering ballots, and even recovered voting materials from a vehicle damaged by a roadside bomb attack. While it is not clear what this election will ultimately mean for the future of Afghanistan, it is undeniable that blood has been shed to achieve this goal. As an American, that makes me extraordinarily proud of our troops.

2010 has been the most difficult year of the war in Afghanistan for U.S. service members. Hopefully, Saturday will be remembered as a turning point. Instead of listening to the usual media pundits bloviate over the weekend, I will be listening to our commanders on the ground, like Col. James Johnson.

"We can't fix the problems of 30 years, or more than that, in seven or eight years," he said. "We have to be patient. We are making progress."