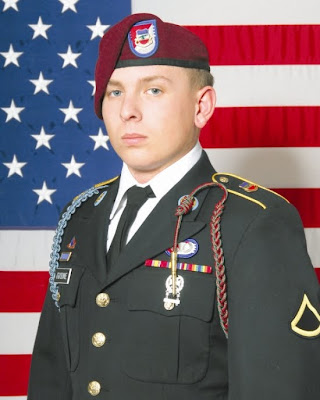 Despite an intrinsic fear of flying, Pfc. Brandon Goodine volunteered at age 18 to become a U.S. Army paratrooper.

"The first time he was on a plane was to jump off it," the soldier's mother, Mandy Watson, often says.

As I drove down a rural Georgia highway on June 18, the classic Steve Miller Band song "Fly Like An Eagle" started playing on my car radio. But despite the soothing music and bright sunshine, this wasn't just another hot summer morning in McDonough, Ga.

Less than a mile from my destination, I encountered a stark reminder of the day's importance that commanded every motorist's attention.

Surrounded by blue flashing lights, American flags, and Patriot Guard Riders on motorcycles, a hearse carrying the flag-draped casket of Pfc. Goodine made a slow right turn. As the procession reached the church, soldiers greeted the fallen warrior's coffin with salutes, while onlookers stood with their hands on their hearts.

As I walked into the small Baptist church, one of two banners hanging above Goodine's flag-draped casket stood out. On it was a majestic bald eagle, along with "God Bless America."

"He was selfless. He was fearless. And he was a friend," Donohue said, later adding that the fourth quality was the soldier's authentic love for his family.

Goodine and fellow paratroopers in the 4th Squadron, 73rd Cavalry Regiment showed extraordinary bravery, the General said, by confronting terrorists in the Maiwand District of Afghanistan's Kandahar province on June 7.

"Everyone in Brandon's unit knew it was a dangerous place when they learned of their mission," he said.

According to the General, Goodine died a few moments later on a helicopter.

"Despite the dead and wounded, they pressed forward," Donohue said of Goodine's valiant brothers in arms.

The General said he recently corresponded with the brigade commander, who stressed that the tremendous sacrifices made that day helped secure a crucial area near the Arghandab River.

"I can't believe the progress since that operation," Donohue quoted the brigade commander as writing in an email. "They made a difference."

As the General's address concluded and Toby Keith's "American Soldier" began to play, I looked to my right and saw a burly, tough-looking young man overcome by pain. With his head pressed against his knees, he was crying uncontrollably. Even though Afghanistan is thousands of miles from our shores, the ongoing war affects ordinary Americans every single day.

A subsequent speaker, Rev. T.J. Boyd, explained that before becoming a soldier, young Brandon, who was living in Luthersville, Ga., was headed down the potentially destructive path of a troubled teenager. Recognizing imminent danger, he decided to change his life.

"A lot of people say folks from Luthersville can't amount to anything," the pastor said, looking directly at the soldier's grieving parents. "I beg to differ. Your son became a hero."

One of the service's most touching moments came when Rev. Boyd spoke to the soldier's three-year-old daughter, Katy.

"He stepped up and showed everyone he was a good daddy," the pastor said.

Even though Goodine wasn't old enough to buy a beer, his resolve to fight was so persistent that it took not one, but two powerful enemy bombs to end his life.

The terrorists ultimately lost the battle of June 7. They also failed to kill Goodine's spirit, which lives on through his family, fellow troops, and an entire community of heroes.

While soldiers carried Goodine's casket out of the church, I looked at the cover of the funeral program, which shows a bald eagle gliding above snow-covered mountains.

As a boy, Pfc. Brandon Goodine was afraid to fly. As a young man, he sacrificed his life so others could be free. Today, he soars like an eagle through the skies of heaven.