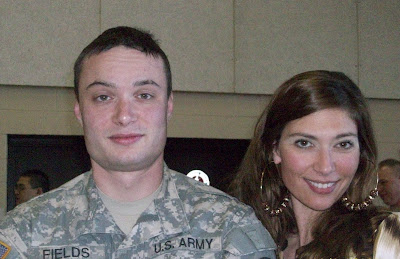 Even while Spc. Arronn Fields was in Afghanistan, he was working on his favorite project: restoring a 1969 Ford Mustang Mach 1.

"He was ordering car parts to the U.S.," the soldier's older sister, Sgt. Cali Cavanary, told The Unknown Soldiers. "There were boxes from FedEx everywhere."

The Indiana native had an affinity for muscle cars, and almost nothing mattered more to him than making his prized Mustang whole again. But when Spc. Fields got the opportunity to deploy to Afghanistan, the soldier felt an obligation to serve, even though he'd already fought in Iraq.

"If I don't go, then someone married with kids will have to and that wouldn't be right," Sgt. Cavanary quoted her brother as saying before his January deployment.

Not surprisingly, Fields' job in Afghanistan was to drive military vehicles. And he treated U.S. Army property exactly like his precious Mustang: with reverence.

"He named his vehicle over in Afghanistan Mona," Cavanary said. "He detailed it and took pride in it."

Despite a substantial age gap, Fields and his big sister shared a special bond since childhood.

"He was kind of like my little kid in a sense," Cavanary explained. "I was always constantly watching him ... being put into that kind of parental role of taking care of him."

When his older sister joined the Indiana National Guard, Fields was watching closely.

"I remember when I graduated from basic training in 2002, he came down to Fort Hood, Texas," she recalled. "He was really proud of me and had a big smile on his face."

Fields followed in his sister's footsteps a few years later. While Cavanary was worried to see her little brother deploy to Iraq, he made it home safely in December 2008.

"We didn't talk about Iraq very much," she said. "Soldiers sometimes don't want to talk about it."

Back in Indiana, Fields would do his duty by day and work on his car by night. But as Fields continued to mature, particularly after his first deployment, Cavanary's admiration for her brother continued to grow.

"He was a better soldier than me, to be honest with you," Cavanary said.

When it came time to leave for Afghanistan, the soldier's sister had an uneasy feeling.

"I would tell him it was dangerous, and he would just laugh me off," she said.

Fields had a busy deployment with the 81st Troop Command of the Indiana National Guard, leaving him with barely enough time to correspond with family and friends.

"He called me one time when he was over there, and I missed the call," Cavanary said, adding that he left a voicemail.

Just after midnight on May 22, Fields' sister, who lives in Indianapolis, got a phone call from her mother, who was hysterical.

"She was crying and I couldn't understand her," Cavanary said. "I handed the phone to my husband."

There was a moment of silence before Cavanary tearfully recounted the painful moment when she found out that Spc. Arronn Fields, 27, was killed by enemy grenade fire on May 21 in Qal-ah-ye Mirza Jal, Afghanistan. 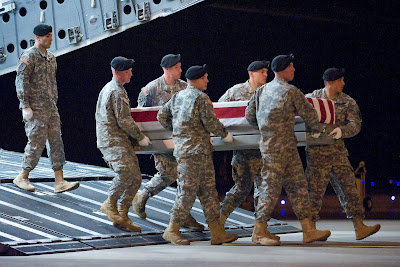 "I didn't think it could be true," the grieving sister said. "But then there was anger. ... Then I wanted to go to Afghanistan and kick some (butt)."

Western Indiana turned out in full force to honor its fallen hero, as residents put up signs on their homes and businesses to salute the hometown soldier's ultimate sacrifice.

"Since I'm in the military, sometimes I think we're taken for granted," she said. "But people do care."

Cavanary, whose deep faith in God has helped calm her initial anger, still wants to serve in Afghanistan.

"Even if I'm not on the front lines, I just want to go and do my part," Cavanary said.

Almost every night, Sgt. Cali Cavanary plays the last voicemail her younger brother left her. While she hopes to one day finish what he started on the battlefield, she's also determined to finish rebuilding his treasured 1969 Ford Mustang.

"He just really loved cars," she said. "That was his favorite thing."