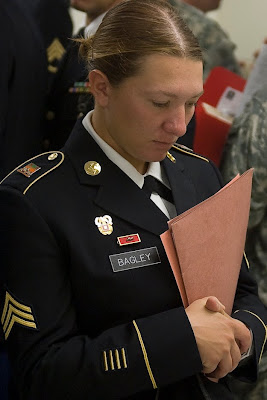 "It's something I always wanted to do since I was little," Sgt. Bagley told The Unknown Soldiers about serving her country. "I did a semester of college and decided it wasn't for me, so I just decided to join the Army."

While the western New York native was deployed to different areas of Afghanistan in 2007-08 and 2010, she had frequent interactions with the civilian population, whom the U.S. military has been helping for almost 11 years.

"Of course, there are some locals who don't like us there," the soldier said. "But all the locals that I met and that we worked with ... they were very appreciative of everything we've done for them."

Being thousands of miles from home isn't easy for anyone, but Erika handled it about as well as a deployed soldier could.

I emailed my mom a lot, so I definitely kept up communications with (my family)," she said.

Erika's unit helps combat troops stationed on remote forward-operating bases stay connected to the outside world. She is currently preparing for her third overseas deployment.

"It hasn't been harder than I expected it to be," the married satellite communications system specialist said. "I enjoy every minute of it."

Having spent nearly two years of her young life in Afghanistan, Erika is well aware of the sacrifices being made there. Sadly, a tragic July 8 incident is a sobering reminder of the daily risks that thousands of brave men and women in uniform face.

On that violent Sunday in Afghanistan's Wardak province, the Pentagon said six soldiers with the 93rd Military Police Battalion, based at Texas' Fort Bliss, died when an improvised explosive device blew up in the mountainous city of Maidan Shahr.

One of the soldiers killed was U.S. Army Spc. Erica Alecksen, 21, a military police officer from Eatonton, Ga., a small city about 75 miles southeast of Atlanta. The fallen warrior leaves behind her husband, her parents, and a brother.

"What some people don't realize is that the sacrifice is real," Erica's aunt, Lydia Ivanditti, said just 16 days after her niece was killed. "This isn't a video game. It's a heart-wrenching, devastating experience to lose someone you love."

Despite a petite frame, Erica volunteered for difficult duty, which often involved carrying heavy gear that added up to more than half her body weight.

"When she came home from boot camp, I asked her about the experience," Ivanditti said. "She looked me straight in the eye and said, 'I never let them see me cry. Not once.'"

Many tears were shed on July 18 as Erica's flag-draped casket was driven from the Greene County Regional Airport to her family's church. But as the soldier's grieving relatives rode in the motorcade, there was reason for hope as citizens lined the streets.

"We would gasp as we came around the bends and saw throngs of people ... thousands of people," Erica's aunt said. "You'd see people on their front porches with hands on their hearts and little boys saluting."

Afghanistan is barely mentioned on the news these days, even though cities and towns across America continue to suffer the devastating effects of war.

"It wasn't like she just affected one group of people," Ivanditti said about her niece, who was posthumously awarded the Bronze Star. "She affected us all."

Like Sgt. Erika Bagley, Spc. Erica Alecksen went to war because she felt a deep sense of obligation.

"She was excited to go Afghanistan and serve," her aunt said. "It was a source of honor and pride that she was getting to go."

Only the most devoted Americans put on a uniform and say, "I'll go." They are the real celebrities of our culture, not actors, politicians, sports stars, or musicians.

This July at Wisconsin's Fort McCoy, Sgt. Erika Bagley was the only woman participating in the Army Reserve's Best Warrior Competition. By continuing to challenge herself as she prepares for a third deployment, she pays tribute to her fellow troops, including those who made the ultimate sacrifice, like Spc. Erica Alecksen. 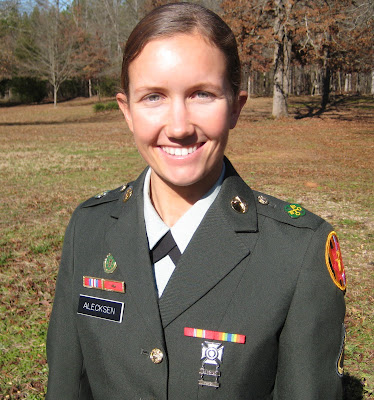